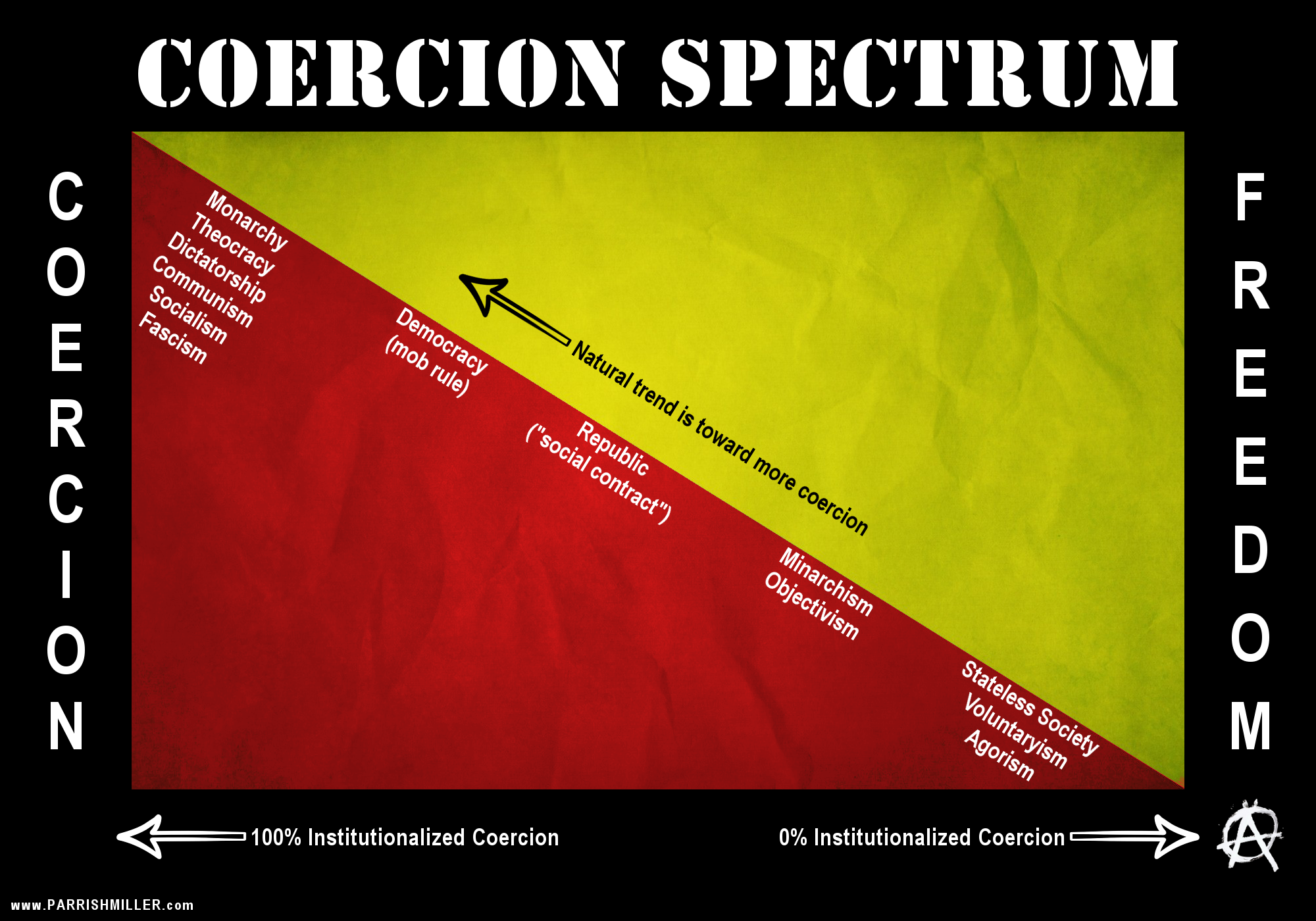 Much time and energy has been devoted over the years to the notion of the 'political spectrum.' (So why not spend some more?) The exact makeup of this spectrum has varied, but the purpose has traditionally been to delineate where someone's views sit relative to the views of others. In this fashion 'allies' and 'enemies' (at least of the political variety) can be identified and their ideological stances mapped and charted. One problem with this notion, however, has always been that some people just don't seem to fit on the spectrum as it has been laid out. While the acolytes of the spectrum will decry these outliers as 'unprincipled' or 'inconsistent,' the real problem lies not with these nonconformists, but with the spectrum itself.

The 'traditional' political spectrum (especially in the US) has generally been expressed as ranging from communism on the far left to fascism on the far right with variations of 'capitalism' in the center. This idea is odd, though, for many reasons including that it essentially ignores the existence of libertarianism. Generally, those defending the spectrum will suggest that libertarians are 'centrists' because their 'right' fiscal policies are combined with their 'left' social policies. This doesn't really make sense, however, because it paints a consistent view of being pro-liberty as being some atypical amalgamation of the 'left' and 'right' sides of the political spectrum.

Another issue comes from observing history: Benito Mussolini's fascist Italy was closely allied with Hitler's Nazi (National Socialism) Germany despite being theoretically on opposite ends of the political spectrum. More general observation of fascist and communist ideology will also reveal significant commonality and few fundamental differences. Why is this? Some will suggest that the political spectrum is actually a circle in which the two extremes connect, but even this explanation fails to fully clarify the situation because it still eschews ideologies advocating limited or no government.

I would suggest that the reason for the failures of the traditional political spectrum is that it is not a true measure of ideology, but rather a scale of excuses for statism. If government claims the power to control individuals, it doesn't really matter if it is communism, socialism, fascism, monarchy, dictatorship, or theocracy — all of these are tyrannies because they violate the sovereignty of individuals.

The real political spectrum is not from one type of government to another, but from total government on one end to unfettered individual liberty on the other. Ultimately, government (of any variety) and liberty are complete opposites. Government and total liberty cannot coexist because institutionalized coercion (which is what government actually is) is fundamentally contradictory to the notion of individual liberty.

In fact, this spectrum should not even be called a 'political' spectrum, but a 'coercion spectrum.' On one extreme we have 100% coercion — governments dictate every aspect of individual existence. On the other we have 0% coercion — all decisions are made by individuals and no coercion is tolerated. From this spectrum we can see that opposition to government (coercion) is necessarily support for liberty and vice versa.

TL;DR Summary: The traditional notion of the political spectrum is fundamentally flawed because it does not accurately reflect the true nature of government which is institutionalized coercion. The real spectrum is not one of politics, per se, but one of coercion and it ranges from 100% coercion to 0% coercion i.e. from total government to total freedom.