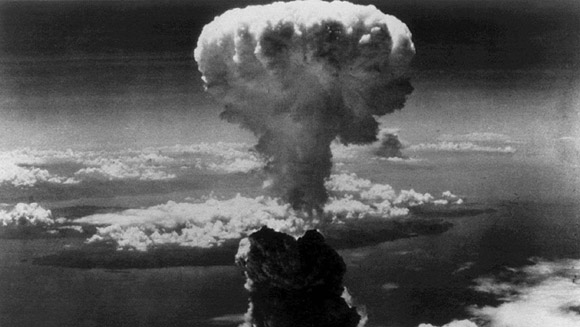 How does this justification for war compare to that offered up for terrorism? The US government engaged in all manner of violent intervention in the Middle East, and in response, a handful of Muslims responded by attacking civilian targets in New York City. Osama bin Laden spelled out exactly why the 9/11 attacks happened:

I say to you, Allah knows that it had never occurred to us to strike the towers. But after it became unbearable and we witnessed the oppression and tyranny of the American/Israeli coalition against our people in Palestine and Lebanon, it came to my mind.

The events that affected my soul in a direct way started in 1982 when America permitted the Israelis to invade Lebanon and the American Sixth Fleet helped them in that. This bombardment began and many were killed and injured and others were terrorised and displaced.

I couldn't forget those moving scenes, blood and severed limbs, women and children sprawled everywhere. Houses destroyed along with their occupants and high rises demolished over their residents, rockets raining down on our home without mercy.

Don't get me wrong, I'm NOT defending terrorism, but I'm also not defending war. Both follow the same playbook by seeking revenge not against the perpetrators of an attack, but against innocent people who were born or live in the same place or who share some common physical or religious characteristics with the attackers. War and terrorism are essentially the same thing except that when a government does it, we call it war and when individuals do it, we call it terrorism.

The latest terror attack in Paris shows similar motivations. France had decided to intervene militarily in the civil war in Syria, and in response, a small group of Syrians plotted and carried out revenge. Sadly, instead of targeting the French government or the French military, they went after an easier target—innocent French civilians.

It's almost always easier to blame and attack civilians for the crimes committed by governments because civilians are less protected. We see this almost every day in the ongoing conflict between Israel and Palestine. The evil actions and attacks carried out by governments frequently elicit violent responses which harm civilians.

War is immoral. So is terrorism. It is ALWAYS immoral to initiate force against innocents even if the presence of those innocents makes it more difficult to find the guilty and bring them to justice. What I am attempting to point out is that the motivations, justifications, and excuses for war are exactly the same as those for most terrorist attacks.* They are both acts of revenge which target the wrong people.

* To be fair, it is theoretically possible that someone without any grievances could commit an act of terror just out of a desire to cause death and destruction, but such attacks remain within the realm of the hypothetical. Hollywood likes to portray villains who engage in horrific acts 'just to watch the world burn,' but we rarely if ever see such things in reality.