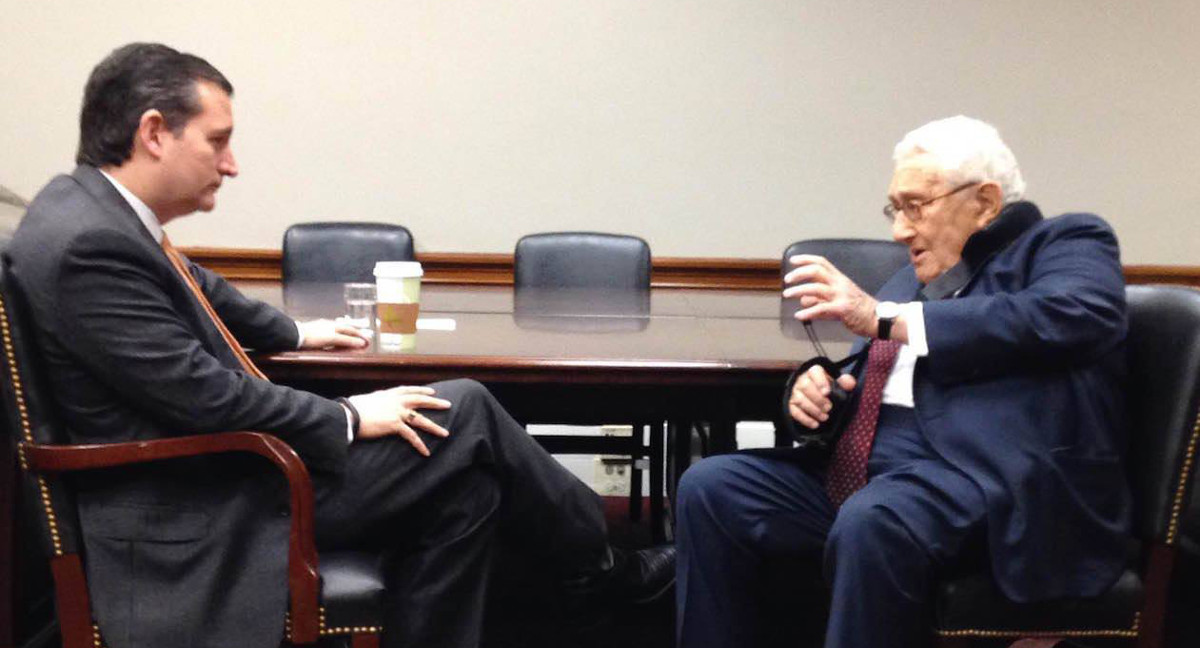 Let me preface this article by clarifying that I don't support anyone for President. I don't need a master, I have no duty to select a master for myself, and I have no right to select one for others. I've already written on why I believe Donald Trump is an Authoritarian Narcissist, but today I'm taking on the surging Sen. Ted Cruz who may soon pass Donald Trump as the front-runner for the GOP nomination.

Cruz is bad enough on domestic policy where he opposes most efforts toward criminal justice reform, supports the drug war, supports domestic surveillance, and advocates even more intrusive immigration laws; but his foreign policy is truly terrifying. Cruz wants to spend hundreds of billions more on what is already the world's most expensive military by a factor of three, and he wants to intervene in sectarian violence and civil war on the other side of the globe. His plan—in his own words—is to "carpet bomb" ISIS until he finds out "if sand can glow in the dark."

And those are just some of the problems with his policy positions. It doesn't even address his questionable connections to Goldman Sachs or the fact that Chad Sweet, Ted Cruz's campaign chairman, is a former CIA officer as well as a former vice president of Goldman Sachs who worked with Michael Chertoff to found the Chertoff Group. If you don't know the history of Chertoff and his part in passing the Patriot Act, I suggest you do some research.

There is also the fact that Cruz posted on his Facebook Page about how he was "honored to share a few moments with Dr. Kissinger and hear his thoughts on the challenges facing our nation." Kissinger, if you recall, is the guy—rightly regarded as a war criminal by many—who once said that "military men are just dumb, stupid animals to be used as pawns in foreign policy."

Need another reason to hate Ted Cruz? How about his recent statement regarding Edward Snowden. Cruz said, "it is now clear that Snowden is a traitor, and he should be tried for treason." As far as I'm concerned, anyone who doesn't recognize that Snowden is a hero and support his actions to expose the crimes of the US government has no business holding any position of power over others.

I can certainly understand the desperation of the "anyone but Trump" crowd, and it's unsurprising that they would gravitate toward his most competitive rival, but Cruz is not what a country already buried under $20 trillion in war debt needs right now. America does not need to be at war. There are no enemies to conquer and no threats that cannot be mitigated through peaceful overtures and free trade.

Sadly, the GOP is on the fast track to selecting its most extreme presidential nominee in decades. On one side is Trump, who has vowed to ramp up torture and slaughter the families of ISIS fighters in violation of all notions of morality (not to mention international law) and on the other side is Ted Cruz whose plan is to "carpet bomb" ISIS until he finds out "if sand can glow in the dark." Where is the candidate who will echo the wise words of Thomas Jefferson, "Peace, commerce and honest friendship with all nations; entangling alliances with none"?