I recently began using the Anker Universal Magnetic Car Mount to hold my phone for navigation in my vehicle, and I'm quite impressed with its performance. 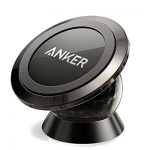 Unlike larger phone holders which stick to the window with a suction cup (until they don't) or otherwise intrude into a vehicle's interior, the Anker Universal Magnetic Car Mount is incredibly low-profile and can be mounted to almost any surface with a small, round piece of 3M adhesive foam tape. Three pieces are included with the mount, one on the bottom ready to use plus two extra pieces in case you decide to relocate it.

In the weeks I have been testing the mount, it has remained solidly mounted to the original location I selected. Because of the rotating head, the mount can be secured at nearly any angle from vertical to horizontal and requires less than a square inch of surface space.

In addition to the mount and adhesive foam, the product includes two metal plates to be mounted to your phone or phone case. Each plate comes with one piece of 3M adhesive connected to it plus there are two additional 1.5" circles of 3M adhesive provided in the box. The metal plates not entirely circular, but are instead heavily rounded squares. They measure just over 1.5" at the widest point.

A few pieces of advice to get the best performance from your Anker Universal Magnetic Car Mount:

This is the latest of at least half a dozen cell phone mounts I have used in my car over the last several years, and it is by far the best.