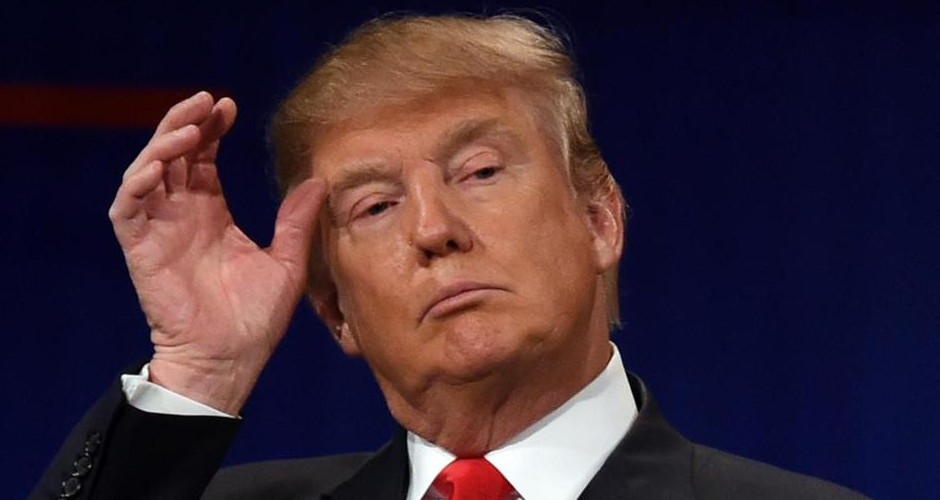 I am a libertarian, so I have several reasons for opposing Donald Trump's candidacy which may not be applicable to most conservatives, but there are also some very compelling reasons why consistent conservatives and "Tea Party Republicans" should oppose him as well. Here are five of them.

He is weak and inconsistent on the Second Amendment.

Although many people may not remember this, Donald Trump has considered making a foray into politics before, and back in the year 2000, he wrote a book on the subject entitled The America We Deserve. In this book he made the following statement about our right to keep and bear arms: "I generally oppose gun control, but I support the ban on assault weapons and I also support a slightly longer waiting period to purchase a gun."

In 2000, when we wrote those words, the infamous federal "assault weapons ban" of 1994 was still in effect. Most modern sporting rifles and all magazines capable of holding more than ten rounds were illegal to produce for the civilian market. It is this now-expired law to which Trump gave his stamp of approval. More recently, in the aftermath of the Orlando shooting in June of 2016, Trump tweeted that he would be meeting with the NRA "about not allowing people on the terrorist watch list, or the no fly list, to buy guns."

Trump's disregard for the "shall not be infringed" mandate of the Second Amendment is equaled only be his dismissal of the Fourth Amendment and due process. If protecting our gun rights is one of your top concerns, you should not be supporting Donald Trump.

He supports government control of healthcare.

While Donald Trump regularly capitalizes on the broad dissatisfaction with Obamacare, he has yet to offer any concrete alternative or to clarify what he would instead. He has promised to replace it "with something terrific" and "something so much better" and "something great," so I guess we're in for... something on the healthcare front if Trump gets elected, but what exactly? Though he usually avoids specifics, he has made some statements that can clue us in as to his true intentions. He accused other Republicans (including Ted Cruz) of being willing to say "Let 'em die" when confronted with someone dying outside a hospital.

Back around 1999, when Trump officially left the GOP because he believed that "the Republicans are just too crazy right," he also endorsed "the single-payer plan" for healthcare, declaring that he was "a conservative on most issues but a liberal on this one." Yes, Donald, we can tell.

His penchant for supporting government control of healthcare has not gone away. Just last year, he told CBS' Scott Pelley that "Everybody's got to be covered [by health insurance] ... I am going to take care of everybody. I don't care if it costs me votes or not. Everybody's going to be taken care of much better than they're taken care of now." Pressed for details, he suggested that he "would make a deal with existing hospitals to take care of people" and that "the government's gonna pay for it."

If you desire true free market healthcare reform, please don't look to Donald Trump. He is sure to disappoint.

Despite his status as the Republican nominee for President, Donald Trump struck a very different tone in a 2004 interview with CNN's Wolf Blitzer. "In many cases, I probably identify more as Democrat. ... It just seems that the economy does better under the Democrats than the Republicans." Back in 2000, Trump called for "a one-time 14.25 percent tax on individuals and trusts with a net worth over $10 million," claiming that such a move "would raise $5.7 trillion in new revenue" which could be used to "pay off the national debt."

His view of economic matters has not shifted all that much based on his more recent statements. Despite publishing a proposal advocating tax cuts across the board, he then backtracked and told CNBC that he was "not necessarily a huge fan of" his own proposal and suggesting that it was just a place "to start negotiating." Negotiating for what, though?

In an interview with ABC's George Stephanopoulos, Trump said that taxes for the rich "will go up a little bit, and they may go up." When confronted with the fact that his published tax proposal called for a decrease, Trump clarified that "in my plan they're going down, but by the time it's negotiated they'll go up." What happened to Trump the great negotiator? He's already conceding that he won't even control the direction the tax rates will move, let alone the degree to which they'll change.

Trump is a huge fan of tariffs (which are a federal tax on imports) and in 2011 he advocated a 25 percent tariff on Chinese goods. In recent months, he's suggested a 45 percent across-the-board tariff on manufactured imports from China, and a 35 percent tariff on goods made in Mexico. He also criticized a trade agreement with South Korea which reduced tariffs. A detailed analysis of Trump's tariff proposals determined that they would result in a 4.6 percent decrease in the size of the US economy, 7 million jobs lost, and a 60 percent increase in the federal budget deficit. Sounds "great," doesn't it?

Speaking of increased unemployment, Trump has said he would consider increasing the federal minimum wage, telling Wolf Blitzer in May of 2016, "I'm looking at that, I'm very different from most Republicans." He also said that while he hasn't "decided in terms of numbers," he believes that "people have to get more."

Do you believe that we are "Taxed Enough Already"? If you do, a Trump Presidency is certainly not going to improve matters in this regard. Higher taxes and massive tariffs will leave us all poorer and much worse off than we are today.

Donald Trump is an authoritarian. It's his way or the highway. He strongly supports eminent domain (the taking of private property for public—and sometimes even private—developments), going so far as to call the process "a wonderful thing." This is cronyism at its worst, forcing people to give up their private property just because it's in the way of somebody else's plans.

What about our rights in the criminal justice system? We already know Trump supports "not allowing people on the terrorist watch list, or the no fly list, to buy guns" despite the loss of due process and Fourth Amendment rights inherent even in the existence of such lists, but that's not all.

He has suggested that there should be "a zero-tolerance policy toward anyone who is getting in the way of the safer America we deserve"—whatever that means—and despite the fact that the US has a higher incarceration rate than any other developed nation on earth, he claims that "America doesn't use prisons much more than any other civilized nation." He ignores his critics on this issue and blithely says that "The next time you hear someone saying there are too many people in prison, ask them how many thugs they're willing to relocate to their neighborhood."

Trump has promised to "get rid of" individuals who belong to gangs "so fast your head will spin." Considering the well-known sluggishness of the criminal justice system, it may well be that he has extrajudicial methods in mind to accomplish his goals.

While Trump claims to support the legalization of medical marijuana, he has said that Colorado's legalization of recreational marijuana was "bad" and said that he "feels strongly about that." We must presume that he prefers the system present in most other states where those who possess a banned plant end up in the prisons he doesn't believe are too full.

Trump has called the heroic whistleblower Edward Snowden a "terrible threat" and a "terrible traitor" and has intimated that he should be executed for exposing the NSA's illegal wiretapping practices.

What about freedom of speech? In addition to threatening to employ the country's "most brilliant minds" in an ill-defined scheme aimed at "closing" parts of the internet, Trump has also said he will seek to "open up" the country's libel laws so that he can more easily sue the press for annoying him. The chilling effect that politicians and prospective politicians routinely suing media outlets would have is apparently of no concern to Trump.

Is our freedom of religion safe at least? Not in the least. In addition to proposing travel bans based solely on religion, Trump has advocated forcibly closing mosques, claiming that there is "absolutely no choice" in the matter. Trump has also called for a "database" of Muslim refugees and has refused to rule out expanding the database to include all Muslims within the country. The First Amendment stands squarely in the way of these proposals, of course, but Trump really doesn't have much respect for the Constitutional limits on the federal government and its executive.

If protecting individual liberty and upholding the Constitution and the Bill of Rights are important to you, there is simply no justification for supporting Donald Trump's efforts to obtain the Presidency.

While this issue may have less relevance to those living east of the Rocky Mountains, to those in the West, it's a significant concern. The federal government's habitual mismanagement of Western lands has caused untold destruction, plus there are the billions (if not trillions) of dollars in potential revenue that remain either untapped or destroyed. This intolerable state of affairs has left several western states with more land controlled by the feds than by the state and all private individuals and entities combined. Where does Donald Trump stand on this issue? Unlike several of the other Republican presidential candidates who came out in favor of transferring at least some federal lands to the states, Trump was flatly against it, saying, "I don't like the idea because I want to keep the lands great, and you don't know what the state is going to do. I mean, are they going to sell if they get into a little bit of trouble? And I don't think it's something that should be sold."

Do you support the transfer of federal lands to the states? Donald Trump sure doesn't, so why would you support him?

It's an unfortunate reality that Trump is weak and inconsistent on the Second Amendment; he supports government control of healthcare, higher taxes, and cronyism; he is absolutely abysmal on individual rights, and he wants to keep western lands under federal control. I haven't even mentioned that he thinks his sister, Maryanne Trump Barry, would be a "phenomenal" Supreme Court justice despite the fact that she has ruled in favor of partial-birth abortions, hardly a position embraced by most conservatives.

I don't know if these reasons are enough to convince my conservative and Tea Party friends to look elsewhere for a Presidential candidate, but if they are, I would suggest taking a look at the Libertarian candidate Gary Johnson. I would certainly never suggest voting for Hillary Clinton, but voting for Gary Johnson—or even refusing to vote altogether—are far more principled choices than voting for Donald Trump.

I certainly won't be voting for or otherwise supporting Donald Trump. Will you?