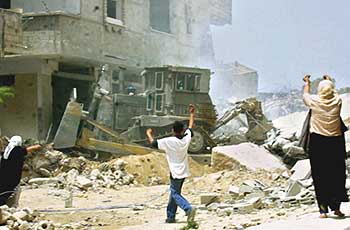 "War" is unjust in all cases because war is simply an excuse for the decision that distinguishing the innocent from the guilty is just too damn inconvenient.

Actions can only be committed by individuals (not broad and involuntary collectives such as countries), and therefore only guilty individuals may be justly punished for acts of aggression. It doesn't matter which well-armed gang or ruthless tyrant is murdering innocent individuals—it could be a US President authorizing the nuking of Japanese cities, agents of Hamas firing rockets at civilian targets in Israel, or Israeli commandos bulldozing the homes of Gaza residents—all of these actions constitute crimes against innocents.

I feel for the families of the three Israeli teens who were recently kidnapped and murdered, but the lives of those unfortunate individuals are not inherently more important or more valuable than the lives of any three (of the many) Palestinian children who have fallen to the latest Israeli offensive. Ultimately, all individuals have equal rights — regardless of where they were born or which government claims jurisdiction over their property.

Am I defending Hamas? Not at all! The individuals who are responsible for crimes (kidnappings, rocket attacks, etc.) should be subject to criminal investigation and prosecution, but innocents should not be harmed simply because of their proximity to the guilty.

There are some folks out there who wish to place some sort of 'collective blame' on all Gaza residents in order to justify the Israeli aggression, but this is a particularly egregious example of collectivist thinking. It's really just an intellectually dishonest shortcut which is used to justify harming the innocent for the crimes of the guilty.

There's an old saying that "two wrongs don't make a right," and what is happening in Gaza right now is a very deadly illustration of this proverb. Kidnapping, murder, and launching rocket attacks against civilian targets are all terrible wrongs, but killing innocent civilians (including children) and bulldozing or blowing up their homes is similarly inexcusable. I hope the individuals responsible for these crimes—on both sides—are one day brought to justice.