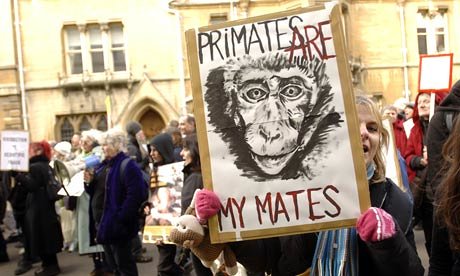 This article was written by Edwin Locke, Ph.D. Due to the fact that the original article appears to no longer be available, I am making it available here. I did not write this article.

Recently a sixth grade student threatened to bomb the headquarters of a prominent corporation, the Gillette Company. Gillette's "crime"? The use of animals to test the safety of their products. This student's role models have not been so hesitant. In the name of so-called "animal rights," terrorists have committed hundreds of violent crimes. They have vandalized or fire bombed meat companies, fur stores, fast-food restaurants, leather shops and medical research laboratories across North America. The animal "rights" movement, however, is not about the humane treatment of animals. Its goal is the animalistic treatment of human beings.

According to these terrorists, it is immoral to eat meat, to wear fur coats or leather shoes, and to use animals in research — even if it would lead to cures for deadly diseases. The terrorists are unmoved by the indisputable fact that animal research saves human lives. PETA (People for the Ethical Treatment of Animals) makes this frighteningly clear: "Even if animal tests produced a cure for AIDS, we'd be against it."

How do the animal "rights" advocates try to justify their position? As someone who has debated them for years on college campuses and in the media, I know firsthand that the whole movement is based on a single — invalid — syllogism, namely: men feel pain and have rights; animals feel pain; therefore, animals have rights. This argument is entirely specious, because man's rights do not depend on his ability to feel pain; they depend on his ability to think.

Rights are ethical principles applicable only to beings capable of reason and choice. There is only one fundamental right: a man's right to his own life. To live successfully, man must use his rational faculty — which is exercised by choice. The choice to think can be negated only by the use of physical force. To survive and prosper, men must be free from the initiation of force by other men — free to use their own minds to guide their choices and actions. Rights protect men against the use of force by other men.

None of this is relevant to animals. Animals do not survive by rational thought (nor by sign languages allegedly taught to them by psychologists). They survive through inborn reflexes and sensory-perceptual association. They cannot reason. They cannot learn a code of ethics. A lion is not immoral for eating a zebra (or even for attacking a man). Predation is their natural and only means of survival; they do not have the capacity to learn any other.

Only man has the power to deal with other members of his own species by voluntary means: rational persuasion and a code of morality rather than physical force. To claim that man's use of animals is immoral is to claim that we have no right to our own lives and that we must sacrifice our welfare for the sake of creatures who cannot think or grasp the concept of morality. It is to elevate amoral animals to a moral level higher than ourselves — a flagrant contradiction. Of course, it is proper not to cause animals gratuitous suffering. But this is not the same as inventing a bill of rights for them — at our expense.

The granting of fictional rights to animals is not an innocent error. We do not have to speculate about the motive, because the animal "rights" advocates have revealed it quite openly. Again from PETA: "Mankind is the biggest blight on the face of the earth"; "I do not believe that a human being has a right to life"; "I would rather have medical experiments done on our children than on animals." These self-styled lovers of life do not love animals; rather, they hate men.

The animal "rights" terrorists are like the Unabomber and Oklahoma City bombers. They are not idealists seeking justice, but nihilists seeking destruction for the sake of destruction. They do not want to uplift mankind, to help him progress from the swamp to the stars. They want mankind's destruction; they want him not just to stay in the swamp but to disappear into its muck.

There is only one proper answer to such people: to declare proudly and defiantly, in the name of morality, a man's right to his life, his liberty, and the pursuit of his own happiness.