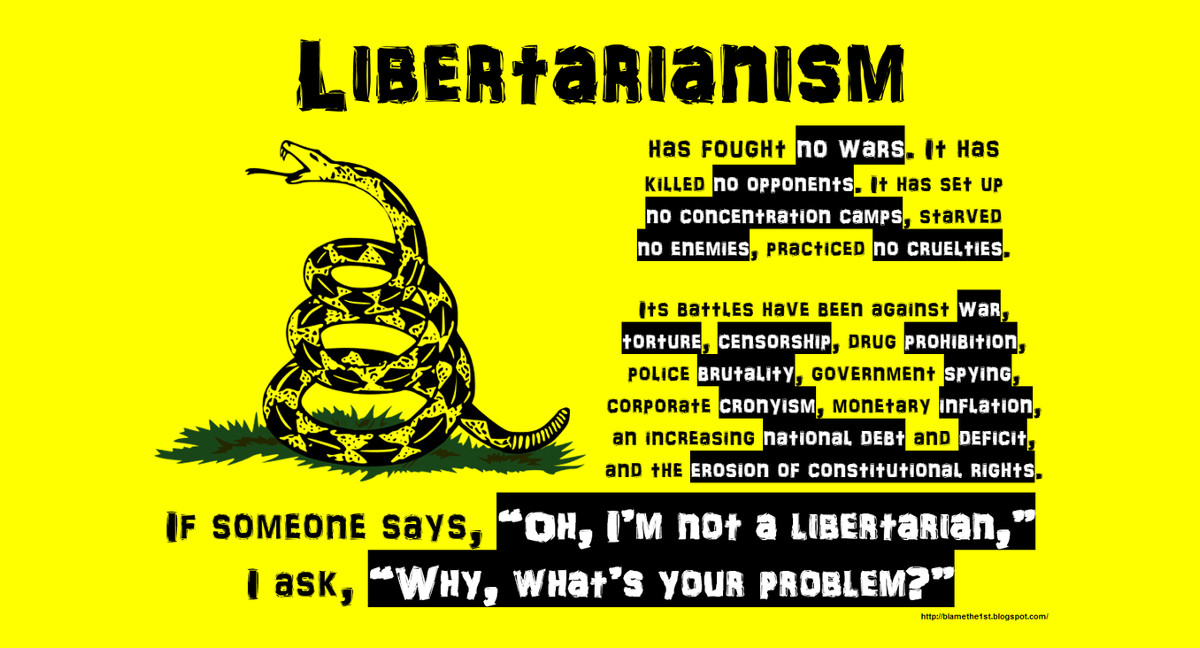 "Mr. Libertarian" Murray Rothbard put it this way, "If you wish to know how libertarians regard the State and any of its acts, simply think of the State as a criminal band, and all of the libertarian attitudes will logically fall into place." Once one recognizes that the authority claimed by the state is fictional, it becomes crystal clear that its actions are no more legitimate than the crimes and claims perpetrated by any other criminal gang.

Matt Kibbe, former President of FreedomWorks, titled his "Libertarian Manifesto," "Don't Hurt People and Don't Take Their Stuff." In just eight words, Kibbe sums up the foundational principle undergirding the philosophy of liberty. Violating the life, liberty, or property rights of others is wrong. That is fundamentally what libertarians believe.

Harry Browne, the Libertarian Party's Presidential nominee in the U.S. elections of 1996 and 2000, said, "We should never define Libertarian positions in terms coined by liberals or conservatives — nor as some variant of their positions. We are not fiscally conservative and socially liberal. We are Libertarians, who believe in individual liberty and personal responsibility on all issues at all times." At all times—a simple phrase that changes everything. Liberty doesn't have an asterisk. There's no exception for war or natural disasters. There's no carve-out for safe spaces or protecting culture. Religion doesn't change it; terrorism doesn't overrule it. Individual liberty trumps everything else: every issue, every time.

Sharon Harris, former President of The Advocates for Self-Government, says that "libertarians believe that each person owns his own life and property, and has the right to make his own choices as to how he lives his life — as long as he simply respects the same right of others to do the same." There is a critically important principle of universality expressed in this quote. Liberty can be exercised by everyone simultaneously without conflict. What is universally intolerable is the use of violence to infringe upon the rights of others or to limit their peaceful, voluntary actions.

Jacob G. Hornberger, founder and president of The Future of Freedom Foundation, recognizes that "for libertarians, freedom entails the right of people to live their lives any way they choose, so long as their conduct is peaceful." The preferences of others are immaterial—the fact that they may dislike alcohol, drugs, sex, or anything else doesn't matter; so long as one person's actions don't infringe upon another person's rights, everything is permissible. Everyone has the right to engage in whatever peaceful, voluntary actions they choose no matter how much someone else may oppose it. That's what liberty means.

L. Neil Smith, a libertarian science fiction author and political activist, said, "A libertarian is a person who believes that no one has the right, under any circumstances, to initiate force against another human being, or to advocate or delegate its initiation." Don't confuse libertarians with pacifists. We support the use of force in defense of life, liberty, and property, but we recognize that it is never justified to initiate force. To paraphrase Kibbe, You never have the right to hurt people and you never have the right to take their stuff. It doesn't matter if undocumented Muslim immigrants are having a gay orgy while guarding their opium fields with machine guns and bazookas. So long as they don't initiate force against others, they are free to do whatever they want.

Libertarianism really isn't complicated. As political philosophies go, it's probably the most straightforward because it has no exceptions or caveats. It holds that every individual has exactly the same rights as every other individual. No factor—not age, race, sex, gender, birthplace, religion, belief system, or anything else—can be used as a pretext for infringing on an individual's rights. All questions regarding the permissibility of actions can be answered by following a simple formula:

Can I do X? Would doing X violate the life, liberty, or property rights of anyone else? If it would, you can't do it. If not, have fun!

How much simpler could it be?

Contrary to the stories told in government schools, the existence of states did not come about because of a need for common defense or infrastructure. It had nothing to do with building roads or creating a justice system. States came into existence primarily because some people wanted to use violence to stop other people from doing things they didn't like. Sometimes this desire was based on superstition and sometimes it was based on faulty science, but typically it was just about personal preference. The same selfish desires account for the vast majority of what government does today.

The most common excuse for the untold millions of petty laws across the globe is safety, but the reality is much less noble. Every drug law, alcohol law, gun law, sex law, and traffic law is ultimately about someone not liking drugs, alcohol, guns, sex, or fast cars. The state doesn't exist to protect people; it exists to control them. One of the most significant differences between libertarians and statists is that libertarians don't want to control people and statists do.

Do you want to be a libertarian? Follow Larken Rose's excellent advice: "Ignore politics. Don't threaten, attack, or rob your neighbor; and don't vote for anyone who offers to threaten, attack, or rob your neighbor on your behalf. Don't, by yourself or by way of those in power, try to force others to be what you wish they were or force them to fund what you wish they would fund. Instead, try treating your neighbor as if he owns himself — because he does."

P.S. Read more about Why I am a libertarian.