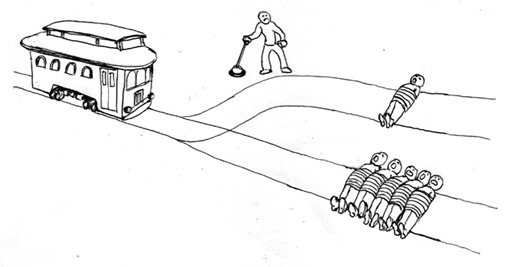 As much as I tend to agree with Voluntaryists on most issues, the one area I have trouble with is their insistence that total abstention from politics is the only moral (and philosophically consistent) position. I believe that one can recognize that government is an unnecessary evil and still work within the system to make it less damaging to individuals. The long-term goal remains the same—the abolition of institutionalized coercion in the form of a state—but the range of allowable interim actions is expanded.

Murray Rothbard once wrote that the "abolitionist is a 'button pusher' who would blister his thumb pushing a button that would abolish the State immediately, if such a button existed." This is correct, but the rest of the quote is often overlooked. He goes on to say that the "abolitionist also knows that alas, such a button does not exist, and that he will take a bit of the loaf if necessary – while always preferring the whole loaf if he can achieve it." How can one take "a bit of the loaf," though, if he eschews politics and the political process altogether?

The danger with this position lies in the 'horse trading' that is endemic in politics. It is moral to vote against expropriation or against criminalizing victimless actions. It is moral to vote for abolishing a tax or decriminalizing a victimless action. Where immorality becomes tempting is in voting for both good and evil (either in the same bill or as part of a you-vote-for-mine-and-I'll-vote-for-yours trade.) Support for evil can never be moral—especially if the 'good' that a bill does is to different individuals than the 'evil' it does.

A bill to pull 10,000 occupying military troops out of country A and putting 5,000 of them into country B might seem like a net positive, but in voting for this measure, you are supporting the initiation of force against individuals in country B. It's like the classic 'trolley problem' moral quandary; if a trolley is bearing down on five people who will surely die, but you have the option to divert the trolley and kill only one, should you do it?

I have always answered 'no' to the question posed by the trolley problem because I believe that you have an obligation to refrain from action which will violate the rights of another (such as diverting the trolley in a manner which will kill an innocent), but that you do not have an obligation to take action to change the course of events set up by another (or by nature.) Thus my political philosophy is that actions (be it a bill or a deal) which bring about harm are unacceptable even if they mitigate harm in another area.

I believe that political action is justified only when it serves exclusively to reduce the initiation of force by the state. Perhaps the most obvious examples of such moral political actions are reducing expropriation (taxes, fees, and fines); reducing regulations, limitations, and prohibitions on victimless actions; and reducing the state's ability to initiate force (such as by reducing the number of state employees or by limiting their armaments.) When these goals can be accomplished either by holding political office or by casting a vote (either as an individual or as an elected official), such political action is justified.

Don't get me wrong, I am not defending the state or the vast majority of actions in which its defenders and acolytes engage. The state is an unnecessary evil, but it is an existent evil nonetheless. Barring the manifestation of Rothbard's button, an obvious or instantaneous option for the abolition of the state remains but an impossible dream. Finding opportunities to weaken the state or curtail its actions is often the best we can hope for, and when such opportunities exist without compromises, why wouldn't we take advantage of them?