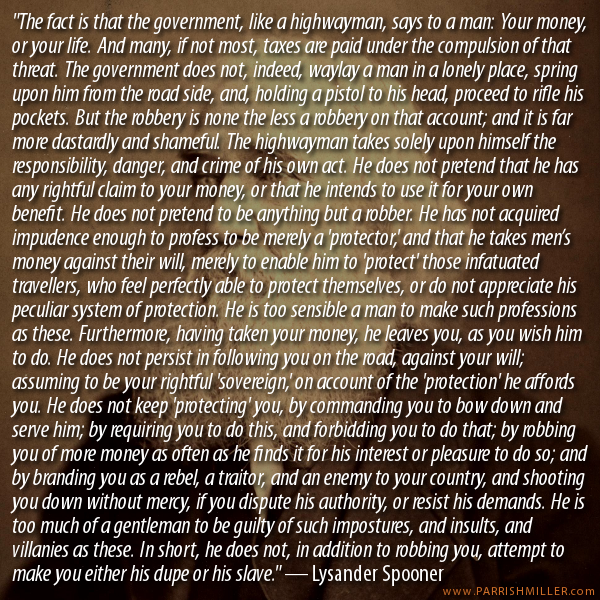 Upon learning that 71.6% of the minuscule fraction of eligible voters who even bothered to show up and vote today said yes to the West Ada School District's $96 million bond request, my first inclination was to damn the majority of my neighbors to hell. I posted to Facebook:

To all those who use the ballot box as their weapon of choice for robbing and plundering their neighbors, I wish you a long and agonizing residency in hell.

My second inclination was to quote some Lysander Spooner. His writings on government and taxation remain among my favorites. The quote I find most relevant at the moment is as follows:

"The fact is that the government, like a highwayman, says to a man: Your money, or your life. And many, if not most, taxes are paid under the compulsion of that threat.

The government does not, indeed, waylay a man in a lonely place, spring upon him from the road side, and, holding a pistol to his head, proceed to rifle his pockets. But the robbery is none the less a robbery on that account; and it is far more dastardly and shameful.

The highwayman takes solely upon himself the responsibility, danger, and crime of his own act. He does not pretend that he has any rightful claim to your money, or that he intends to use it for your own benefit. He does not pretend to be anything but a robber. He has not acquired impudence enough to profess to be merely a 'protector,' and that he takes men’s money against their will, merely to enable him to 'protect' those infatuated travelers, who feel perfectly able to protect themselves, or do not appreciate his peculiar system of protection. He is too sensible a man to make such professions as these. Furthermore, having taken your money, he leaves you, as you wish him to do. He does not persist in following you on the road, against your will; assuming to be your rightful 'sovereign,' on account of the 'protection' he affords you. He does not keep 'protecting' you, by commanding you to bow down and serve him; by requiring you to do this, and forbidding you to do that; by robbing you of more money as often as he finds it for his interest or pleasure to do so; and by branding you as a rebel, a traitor, and an enemy to your country, and shooting you down without mercy, if you dispute his authority, or resist his demands. He is too much of a gentleman to be guilty of such impostures, and insults, and villanies as these. In short, he does not, in addition to robbing you, attempt to make you either his dupe or his slave."

I was so inspired that I even made a meme of this quote. You're welcome! (This meme is also available on Facebook if you would like to share it.)