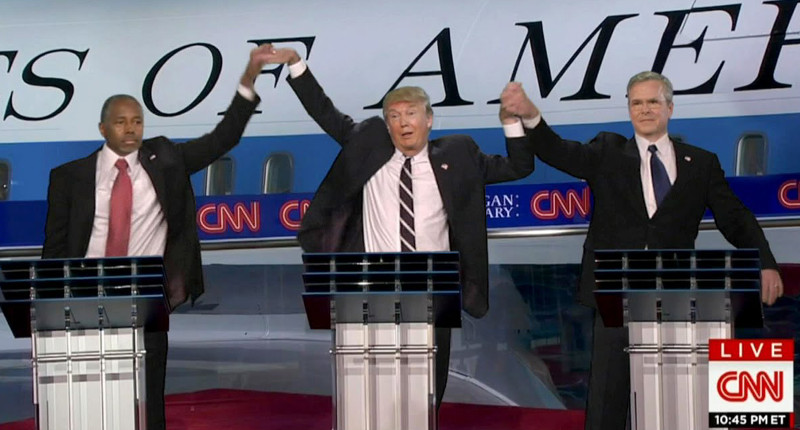 Hating Donald Trump has become the new national pastime. You can't watch the news, check Facebook, or even gossip around the water cooler without someone expressing why they hate Donald Trump. He's regularly compared to Hitler, denigrated as a racist, and mocked for his hair, his name, his family, and everything else you can possibly imagine.

The problem is that almost everyone is missing the point. Hating Donald Trump because of his hair or his family name is stupid and childish. Hating him for (allegedly) harboring racist attitudes may be justified, but millions of people are far more outspoken in their racism, and almost no one wastes time hating them. Hating Donald Trump because he's a liar or a braggart might be understandable, but those facts alone don't hurt anyone.

Here's the kicker, though. Donald Trump is the same as every other politician running for President. Every single name on the ballot is of a self-important individual who is ready and willing to use the force of government to compel compliance with their personal worldview.

Uniquely hating Donald Trump among politicians is like hating one gun-toting mugger more than another based solely on what they buy with the stolen money. "I got mugged twice last week, but the second guy is worse because he used the twenty dollars he stole from me to buy the special edition Blu-ray of Transformers 4. That movie sucked!"

The problem with getting mugged at gunpoint is not that the mugger has bad taste in movies, it is that he mugs people at gunpoint.

Similarly, the problem with Donald Trump is not his hair, his name, his business history, or even his view of foreigners. The problem is that he wants to take away people's liberty at gunpoint. That problem goes well beyond Donald Trump, however. It is the problem with politics, government, and the whole notion of legitimate authority.

Don't get sucked into the game of hating Politician A and imagining that Politician B will somehow be better. Don't hate the player, hate the game. Trump's candidacy is the symptom, statism is the disease. If you're determined to spend time hating something, hate the state. It's our worst enemy by far.