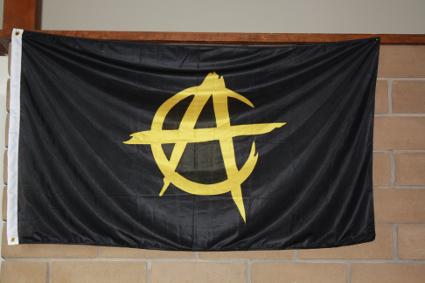 I consider myself a free-market anarchist which is often regarded as essentially the same as an anarcho-capitalist (or an-cap.) The differences or lack thereof between market anarchists and an-caps is beyond the scope of this article. What this means for me is that I advocate a stateless society (sometimes euphemistically referred to as "Ancapistan") in which all transactions are voluntary and in which the non-aggression principle and individual rights to legitimately-acquired property are respected.

Imagine two men: John is raised by white, middle class parents including his father who works for the state, receiving more than $100k per year for his efforts. Sam is raised by a single mother because his father was incarcerated for his entrepreneurial efforts regarding a banned plant. John pays a significant amount of taxes every year thanks to the good job he got. He was able to attend an excellent (and expensive) university which his father helped him afford. Sam barely earns minimum wage and pays almost no taxes thanks to the fact that he was expelled from high school after being caught selling marijuana to help take care of his sick mother and three siblings. With no college education, no high school diploma, and a criminal record, Sam has a very difficult time finding and keeping a job. He also qualifies for food stamps which he gladly and gratefully accepts.

Now the average an-cap would likely argue that John is being extorted by the state (through taxation) in order to redistribute his money to Sam (through food stamps), but is that really what's happening? A cursory look at the situation might make it appear so, but by looking at the history of both individuals, a more complete picture is revealed. Both Sam and his father were repeatedly victimized by the state while John's family was actually enriched by it. Sure, today, John is being extorted and Sam is receiving a little bit of assistance, but the scales of justice are still far from balanced.

The typical an-cap will correctly point out that in a stateless society, Sam cannot justly steal money from John simply because Sam is hungry, but this simplistic view ignores the decades (or centuries in some cases) of systemic injustice which have created and perpetuated generational poverty and other problems under a state. The principle that theft is wrong is correct, but the situation in which people (both taxpayers and those receiving assistance) find themselves today is not at all analogous to life in a stateless society.

The an-cap will be inclined to object that any restitution paid by the state to a victim of police brutality only serves to extort the taxpayer and while this might be true from one perspective, it ignores the fact that the state already extorted the taxpayer to hire the officer, pay his leave, legally defend him, and (on rare occasions) prosecute him. Arguing that the officer should be treated as would any other individual accused of assault in a stateless society deliberately disregards the fact that this is most certainly NOT a statist society and that the officer will invariably NOT be treated that way. In many cases, the victim of police brutality will even face additional state aggression in the form of criminal charges.

Unyieldingly demanding that the state's victims not receive assistance or restitution in our existing society because they wouldn't have that option in a stateless society ignores both the general injustice of life under a state and the inherent advantage that state employees and bureaucrats always enjoy when they find themselves in conflict with others. Recognizing how people and justice would operate in a free society is great, but it doesn't necessarily follow that applying those standards to an entirely different society will always make things work better. It might in some cases, but one ought to evaluate the real-world implications of a policy before advocating its adoption.

My final example is the current situation involving Syrian refugees and the refugee resettlement program which has garnered so much controversy. It is indisputable that the refugees exist primarily due to state-initiated violence and destruction, yet many an-caps suggest that any remedy involving the state should be summarily disqualified from consideration. The truth is that in a free society, states wouldn't wage wars, national borders wouldn't exist, and state permission would not be required to assist people in need. Comparing such a radically different world to this one naturally results in erroneous conclusions. In this world, the best way (and the only realistic way) to mitigate the harm done by the state in creating refugees is either to eliminate the state entirely (which isn't going to happen anytime soon) or to push the state to make restitution to the individuals it has victimized.

I hate the state as much as anyone and far more than most, but I can recognize that the solution to state violence is not to pretend that the state doesn't exist. Seeking restitution for the most aggrieved victims of state-initiated violence is a far nobler endeavor than is trying to superimpose the values and anticipated norms of a stateless society on a situation that is basically the exact opposite. I essentially agree with most an-caps on how things should work once the state is abolished, but until that happens, I choose to focus on reducing the violence committed by the state and seeking reparations for its victims rather than ignoring them and their plight.