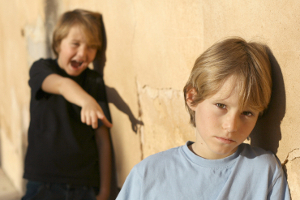 'Anti-bullying' laws have been all the rage in recent years. As technology has improved and mobile technology especially has proliferated among young people, confused parents, teachers, and lawmakers have responded with a raft of proposals aimed at restricting free speech among this tech-savvy generation. It's not just this theoretical 'bullying,' either that has these folks in a tizzy; equally concerning to these luddites is the growing popularity of 'sexting' both between the romantically involved and anonymously via an ever-growing litany of social media platforms.

Technology isn't going away and neither is the anonymity that makes expressing one's views and opinions without fear of reprisal so appealing. It's time that we accept this fact and start to actually differentiate between physical acts of violence—which should be the sole definition of bullying—and free speech, whether exercised anonymously or not.

Let's start at the beginning: every individual has the right to not have their life, liberty, or property aggressed against. You have the right to not be shot, stabbed, kidnapped, assaulted, beaten, pushed, shoved, or robbed. What you don't have is a right not to be offended or to have your feelings hurt. So long as you and your property are not physically aggressed against, others can to insult you or call you names without actually running afoul of your rights. That's how free speech works. I can call you a "retarded fuck head" and say that "God hates you and you will burn in hell," and not be guilty of any crime against you. That's not to say that there may not be repercussions for my actions; people may well shun me socially and even refuse to do business with me if I use my free speech in a manner that causes them to take offense.

Much of the 'anti-bullying' legislation that has been presented has failed to make this critical differentiation between violence and free speech and, in some cases, has even been crafted specifically to disallow what is sometimes caused 'cyberbullying.' This notion is one of the most ludicrous concepts to ever make it into the public lexicon. Simply put, it is the idea that "the electronic posting of mean-spirited messages about a person" (and yes, this is the dictionary definition) is a matter which should warrant discipline or even criminal sanctions.

In addition to it being a full frontal assault against free speech, there is another compelling reason to oppose this ill-conceived anti-bullying claptrap that has invaded our state legislatures—it makes people soft. It perpetuates the notion that being offended is a legitimate reason for government intervention. Let me reiterate a point I have made many times before: offense is taken, not given. Those who choose—and make no mistake about this, it is a choice—to take offense are every bit as much of a problem as are those small-minded 'bullies' whose actions initiate so much official hand-wringing. It is time for this generation to develop a backbone to accompany its freedom. Yes, some people will say things you don't like; they will be insulting and boorish, and they will use every verbal weapon in their arsenal in an attempt to break your spirit and thereby feel better about themselves. So what? Are you going to let them win? Are you willing to sacrifice our freedoms to avoid hurt feelings?

There is an old adage which has largely fallen out of favor, but which I still believe has enormous value: "Sticks and stones may break my bones, but words will never hurt me." It's not just an observation, it's a declaration; it's not words can never hurt me (as it is occasionally misstated), it's words will never hurt me. Make a decision not to give the verbal villains any power over you and you win by default.

Bullies who use physical violence should be dealt with swiftly—preferably by the would-be victim and/or their friends—and their aggression should be halted in its tracks. Don't get me wrong, I'm not afraid to engage in self-defense or come to the aid of another should the occasion call for it. I carry a gun for a reason. Those who initiate force against others need to be stopped, and my views of 'bullying' are not intended to diminish the truly reprehensible injuries that some people suffer at the hands of violent bullies. My issue is that the notion of bullying has been expanded to the point where free speech is constrained and the weak-minded are permitted to negate our liberties.

We do not need separate laws to deal with bullying because we already have a plethora of overlapping laws against physical violence. The problem is not a lack of laws; the problem is a lack of fortitude. The maligned must not allow the discourteous to ruffle them. Parents must recognize that life is not always everything they wish it could be for their children; sometimes it will be unpleasant. Educators and lawmakers must learn to respect free speech first and foremost, yet still be willing to intervene when acts of violence make it truly necessary.

Ultimately, curtailing freedom is not the solution to undesirable behavior. Voluntary persuasion and even ostracism when necessary are the proper tools to use when some people use speech in an uncivil manner. Beyond that, instilling a strong spine and a well-developed sense of self-worth in our children will make them virtually impervious to the verbal nuisances which they will inevitably encounter. That's the best solution of all.