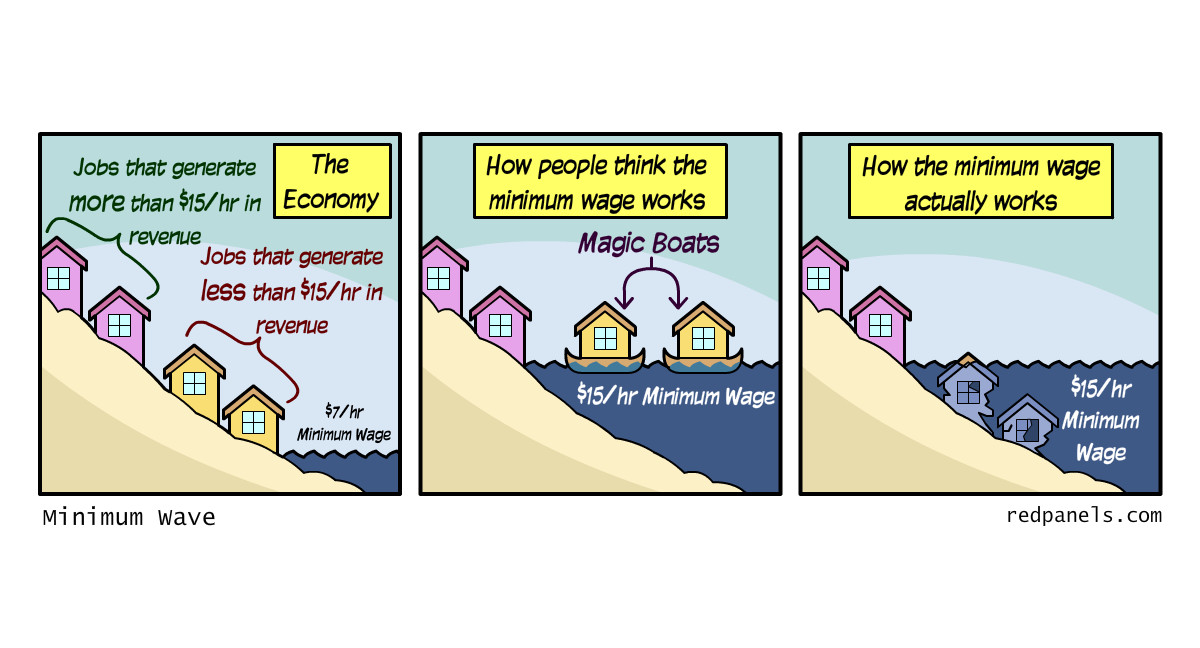 This article was originally written for the 2015 Idaho Liberty Expo.

At first glance, a minimum wage might seem like a good idea. People need money to live; more money should help them live better, right? Of course, concepts involving economics (to say nothing of humans) are never really that simple. Not only does the notion of a government-imposed minimum wage fly in the face of economic law, but the whole premise—that forcing employers to pay employees more will 'help the poor'—is fundamentally flawed both philosophically and practically.

Although perhaps not the most engaging discipline for some people, basic economics is critical to understanding why the minimum wage does not—and cannot—have the desired effect. In the typical interaction between buyers and sellers, supply and demand are the two primary economic factors which determine price. The natural, market price is found at the equilibrium point between these two factors.

If I have a product to sell, but I cannot find anyone willing to buy, there's a very good chance the reason is that I am asking too high a price. If I sell out of my product almost immediately, my price was in all likelihood too low. Finding the equilibrium price between supply and demand is necessary not only to maximize profit, but to prevent surpluses and shortages.

Selling one's labor (which is what looking for a job really is) is really no different than trying to sell any other product. If no one will hire you (assuming you are qualified for the job you are seeking) the price you are asking for your labor is probably too high. If multiple prospective employers are competing to hire you, you could probably ask for more. Of course, all jobs and all skills are not equivalent just as all products are not acceptable substitutes. If the price of bread goes up, it can't necessarily be replaced with milk just as a welder shortage (which would tend to increase the wages of welders) won't result in welders being replaced with bankers.

For this reason, most talk of the 'labor market' is quite inaccurate. There is no generic labor market any more than there is a generic 'stuff market' in which all goods and services are looked at as equivalents. Metrics that make such generalizations (such as the GDP) tend to be somewhere between misleading and worthless.

Within coherent categories, though (similar goods or services and acceptable substitutes) the principle of supply and demand applies, and a surplus is the natural and predictable result when supply exceeds demand. This is true of labor as well. When the supply of labor within a category exceeds the demand for it, the resulting surplus is called unemployment.

The most straightforward way to reduce a surplus is to lower the price. If a store has merchandise that no one will buy, the manager needs to either put it on sale temporarily (if demand is merely slow) or put it on clearance and get rid of it (if demand is falling or non-existent.) Likewise, if no one will hire you, the best way to increase demand would be to lower the asking price for your labor.

[Let me just pause here to apologize for using 'demand' in cases where it would be more accurate to refer to the 'quantity demanded.' Strictly speaking, a shift in demand occurs despite price and a shift in quantity demanded is movement along the demand curve. I'm trying not to be too technical here.]

One type of government meddling in the market, which is particularly destructive, is the imposition of price floors and price ceilings. These constraints do not alter the relationship of supply and demand, but instead just distort the market and create shortages and surpluses. In the extreme, providers are simply pushed out of the market (because supply and demand cannot be balanced) and the restricted goods may no longer be available at all.

The minimum wage is a price floor on labor. In other words, the minimum wage makes it illegal for you to put your labor on sale in order to increase demand. If the value (the equilibrium price) of your labor is below the price floor, your labor becomes unsellable surplus and you are unemployed. This is especially true in cases where other factors contribute to a surplus such as a large restaurant closing in a small town. When numerous unemployed people with similar skills are seeking employment at the same time (especially in a small market) the only leverage those seeking to sell their labor have is to underbid each other in an attempt to find a buyer (an employer.)

Milton Friedman once correctly observed that "the true minimum wage is zero—the amount an unemployed person receives from his nonexistent employer," and that is the end result for thousands of people each time the minimum wage is increased. Those whose labor is worth the least (due to age, disability, lack of experience, etc.) are the most likely to be forced into unemployment by an increase in the minimum wage.

Contrary to the fear mongering of those who advocate government intrusions into the market, removing the constraint of the minimum wage would not necessarily result in falling wages; rather it would simply allow wages to react to the market and to rise and fall based on supply and demand. In fact, some economists believe that wages are naturally resistant to decreasing (i.e. "sticky downward") and would thus be unlikely to decrease even if the minimum wage were eliminated.

Perhaps more obviously (to everyone except those in government) mandating higher wages does not magically produce more money for employers to allocate to their labor purchases. Instead, some businesses will close, others will shorten their hours, and some will look to automate or outsource. The market will survive the shift, but many businesses and employees will not.

Consider the current trends in the restaurant industry (where many people have had their first job.) McDonald's is experimenting with self-service kiosks for ordering; Taco Bell allows people to order via an app; Applebee's lets you order appetizers and drink refills and even pay your tab via a tablet computer which is located on each table. As the cost of employees continues to increase (and this is due not only to wages but also to the cost of taxes and benefits) employers will continue to look for alternatives.

Even in China (where wages are comparatively low) the Changying Precision Technology Company factory (in Dongguan) recently replaced 90 percent of its workforce with robots. The change increased productivity by 163 percent and lowered defect rates from 25 percent to less than 5 percent.

The point is that workers (especially in entry-level jobs) are not actually indispensable and when government policies (such as the minimum wage or Obamacare mandates) cause their costs to increase, businesses will naturally look for ways to hire fewer of them.

The greatest irony of the minimum wage is that those who are harmed the most by it are those who its advocates claim to be trying to help. It's not the CEOs, shareholders, or managers—it's those who are less skilled or otherwise less desirable as employees. The teenager looking for her first job, the recently incarcerated man trying to abide by the terms of his parole, the single mother who needs specific hours for her second job—these are the people whose labor will become part of the unpurchased surplus which makes up this nation's unemployed. The folks who need the raises (or the jobs) the most won't get them; instead, they'll get pink slips.

The solution to poverty is not government mandates that run contrary to the laws of economics. Demanding that employers pay employees more than their labor is worth will not create more money to accomplish the desired goal. Wages tend to rise naturally when the economy improves because greater wealth increases the overall demand for goods and services (although some sectors regarded as substitutes for better alternatives may actually contract when the economy improves.) The best way for prospective or current employees to obtain higher wages in any given economy, however, is to actually increase the value of their labor through training or education.

The same laws of supply and demand that may seem to work against you as an unskilled laborer can be your best friend when you have knowledge or skills that are in high demand. Learn how to do something few others can, and you can write your own ticket. Success is not a gift of government, but something that individuals earn through hard work, tenacity, and entrepreneurship. In the words of world champion racecar driver Mario Andretti, "Desire is the key to motivation, but it's determination and commitment to an unrelenting pursuit of your goal - a commitment to excellence - that will enable you to attain the success you seek." The truth is that the minimum wage is for those who have minimum skills and put in minimum effort. Don't let that be you. Don't expect—or even ask—government to subsidize your shortcomings, instead overcome them and show the world that you deserve the success you achieve.