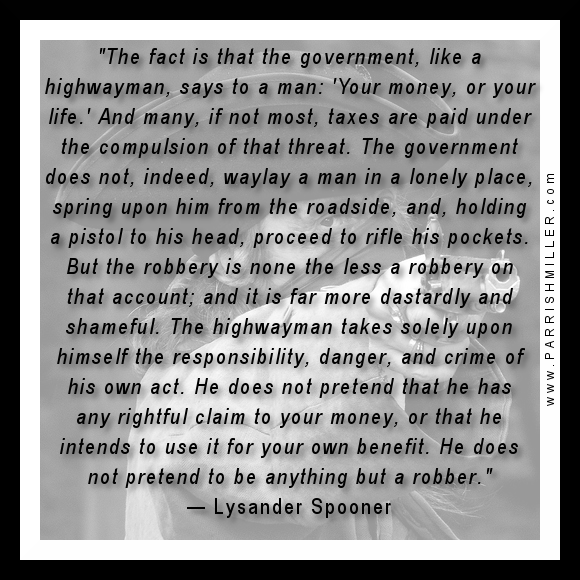 The only difference between a tax collector and a thief is the presumption of legitimacy.

Why do so many still intractably believe that government has any real or legitimate authority over individuals and their property? Did you agree to this relationship? Did you sign a contract agreeing to do whatever the government said in exchange for the illusion of safety or civility?

While some might indeed be willing to make such a 'deal'—were it ever actually formally offered—there are no doubt many (myself included) who would never agree to such terms. I don't want government 'services'; I don't need state enforcers shooting my dog or stealing my property. I'd rather take my chances with the criminals who at least unapologetically acknowledge their criminality than deal with the self-righteous agents of the state who pretend that their aggression is somehow legitimate or necessary.

Larken Rose sums it up beautifully:

"The truth is, one cannot believe in 'authority' and be free, because accepting the myth of 'government' is accepting one's own obligation to obey a master, which means accepting one's own enslavement. Sadly, many people believe that begging the master, via 'political action,' is all they can do, so they forever engage in rituals which only legitimize the slave-master relationship, instead of simply disobeying the tyrants. The idea of disobeying 'authority,' 'breaking the law,' and being 'criminals' is more disturbing to them than the idea of being a slave."