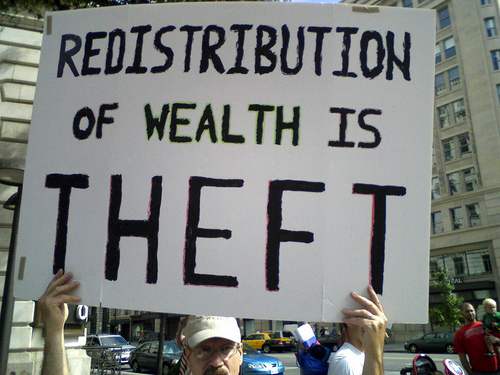 I recently had a socialist tell me that redistribution didn't harm the economy at all because the money would get spent either way. In fact, he claimed that redistribution was more efficient because poor people spend their money while rich people "hoard" it.

I found his argument interesting if only because it revealed his fundamental misunderstanding of how wealth is actually created. In my attempt to educate him, I posited the following scenario.

Imagine that I am fairly well-off, and have made the decision to purchase an 80-inch TV at a cost of $4,000. My unemployed next-door neighbor is far less well-off and doesn't have a TV at all. Now let's assume that the "benevolent" neighborhood government decides to "redistribute" half of my $4,000 to my neighbor so that we can both purchase TVs. After all, they reason, is it not better for two men to each possess a 60-inch TV than for just one man to have an 80-inch TV?

On the surface, this logic may seem reasonable, but let's consider the long-term ramifications of this decision. Now that I know my money is going to be forcibly taken from me, I have far less incentive to work and make money at all. Why not just work half as much and enjoy my new TV? That way, I won't have to labor for someone else's benefit. My neighbor has likewise been discouraged from seeking gainful employment because he now knows that he will end up with the same resources as me even if he does nothing.

Both the person whose money is stolen and the person who receives the stolen money are disincentivized from engaging in productive activity and as a result the net total of wealth created decreases dramatically. Some may argue this disincentive is exaggerated, but economic law is clear: the less one nets from their labor, the less labor they will be willing to offer at that price. Consider simply how many hours you would be willing to work at $1,000 per hour. How about $100? How about $1? I will assume the number of hours is zero at $1 an hour, much higher at $100 an hour, and probably as many hours as you could possibly stay awake at $1,000 an hour!

Redistribution—in any amount—results in a net decrease in produced wealth which will result in worse outcomes for everyone in the long term. Allowing the free market to function unencumbered by regulation and compulsory redistribution will result in individuals selling their labor for the most they can obtain and thereby maximizing their effort and wealth production across the board. Isn't it amazing how economic realities cut through socialist dogma?

By the way, this reduction in wealth production is not nearly as dramatic with voluntary charity because the giver is actually willingly spending his money on charity (he is essentially purchasing good will, good karma, a clear conscience, etc.) and because the receiver is not assured of future handouts (as he is with government redistribution.)