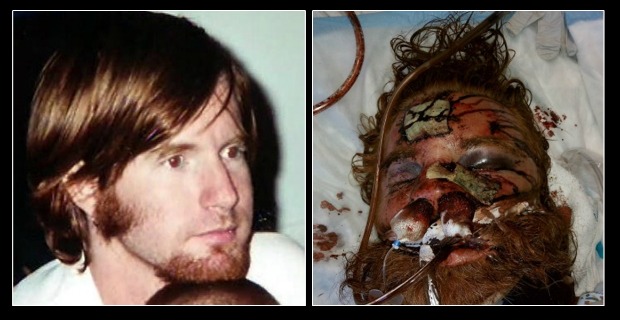 Perhaps unsurprisingly, Manuel Ramos and Jay Cicinelli, the two uniformed thugs who beat a homeless man to death, were today found not guilty of all charges. Inexplicably, the man whose life they ended is still dead, however... How is it possible that an unarmed man ends up dead after a vicious beating, but those cretins responsible for the lethal beating are found not guilty of any wrongdoing?

The answer, of course, is that we live in sick, twisted, demented society in which the issuance of a badge and a government costume is imagined to justify the most heinous forms of abuse, kidnapping, and murder. The only thing to rival my abhorrence of these most loathsome creatures is my absolute contempt for the sniveling cowards who sat on their jury. Those who conspired to deny Kelly Thomas not only his life, but also justice for his murder have joined together in a pernicious alliance to defend the slaughter of innocents under color of law.

This case is far from an aberration, yet defenders of statism continue to insist that the abolition of the state would lead to "chaos" and rampant violence and injustice. Can they not see the horrors of the tyranny under which we now languish? Are they blind to the innocent lives snuffed out each day by the apparatus of the state? The blood of the victims of state-sanctioned murder cries out for justice but is repeatedly denied. Who will be Leviathan's next victim? Rest assured that whoever it may be, the ones responsible for the crime will not be brought to justice. Kelly Thomas is dead and his executioners walk free.

This is what "justice" looks like under the iron fist of the totalitarian state. This is the future that we are handing down to our children. Now what are you going to do about it?