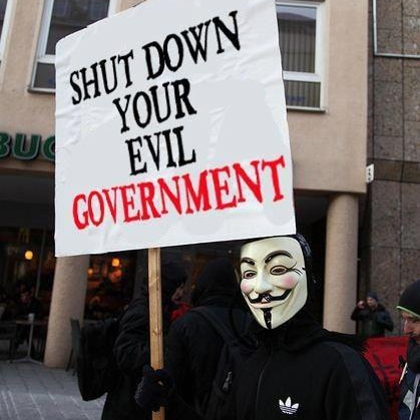 Occasionally, someone (typically someone who doesn't know me very well) will inquire as to what I would consider a "good" government or the "proper size" of government. I can answer this question in short or long form, but invariably the short form only serves to leave the inquirer more confused, so I generally try to include some detail in my answer.

The short answer to the question is none. No government of any kind, shape, size or scope. This answer sometimes elicits shock, confusion, and even disbelief. "But what about the roads?" someone asks. "Who would punish criminals?" inquires another. "That's just anarchy!" is another popular response. At least that response is close to accurate, although in general usage, "anarchy" is typically (and inaccurately) used as a substitute for "chaos" and not as a way of referring to a market-based, stateless society.

Going into detail on the subject is somewhat difficult because it requires challenging a very fundamental paradigm that most people believe in wholeheartedly — the existence of (legitimate) authority. The truth is that there simply is no such thing as authority because illegitimate authority isn't authority at all; it's just someone making a demand that contains an underlying threat. If there were no underlying threat, it wouldn't be a demand, it would be a request. The notion of legitimate authority is equally nonsensical because it implies that the person claiming such authority actually has some right to control the actions of others.

There is perhaps no better illustration of the absurdity inherent in the idea of legitimate authority than the belief in the "divine right of kings." Now this concept was extremely useful for the kings, but it lacked any logic whatsoever. In truth it was nothing but a superstition, a belief in magic. Modern societies have largely abandoned the notion that the supposed authority to rule is "divine," but they have replaced it with an equivalently spurious superstition — the "social contract."

The idea of the "social contract" (in its modern iteration) is essentially that, merely by existing, all individuals have given consent to follow the edicts of whatever rulers are selected by the majority in a particular collective. Never mind that some individuals are prohibited from participating (minors and felons, for example) or that the size and borders of the collective may change at any time (annexation, treaties, etc.), the consent (which you never actually gave) is irrevocable and thus you have no choice but to obey or leave (and the collective can actually block you from leaving.)

The excuses which are made for the existence of authority—magic power or non-consensual consent—reveal the spurious nature of such claims. Authority is a lie, a superstition. The assertion that the initiation of force by some has been legitimized is always false because the only legitimate human interaction is voluntary, and voluntary interaction (even if it resembles authority such as in an employer-employee relationship) is always based on actual, articulable consent. An employer doesn't have any actual authority over his employees; he merely has a voluntary trade agreement with them which is mutually beneficial.

Once you understand the truth about authority (it's fictional), it becomes clear that government isn't real either. Oh sure, there are people calling themselves government and there is property that these people claim to own, but it's all just a scam, a long con of epic proportions. To paraphrase Nietzsche, everything government says is a lie, and everything it claims to own is stolen. The supposed authority of government is no more real or legitimate than the "right" of any street gang to demand protection money or of a crew of burglars to break into and loot your home. Groups of individuals may carry out crimes, but calling themselves a government does not in any way legitimize or pardon their actions.

So what are we left with if both authority and government are fictional? We are left with sovereign individuals. From the richest and most brilliant individual to the poorest and most inept — every individual is an absolute sovereign with inalienable natural rights of life, liberty, and property. Any initiation of force against these rights—by anyone, for any reason imaginable—is an egregious act of aggression which renders the aggressor the rightful target of defensive force — up to and including lethal force if necessary to terminate the aggression.

Humanity does not need government. Humanity does not need complex and inconsistent moral codes based on superstition and belief in magical authority. Humanity simply needs to recognize the indisputable reality of natural rights and the immutable truth of the non-aggression principle. You don't owe allegiance to a flag (or a republic.) You don't owe obedience to a government or ruler. You certainly don't owe tribute (euphemistically called taxation) to anyone. There is no such thing as authority and there are no legitimate rulers.

It's time to grow up and abandon the fairy tales we were taught as impressionable children. It's time to throw off the yoke of oppression that has been put upon us by criminal gangs calling themselves governments. It's time to recognize that an act of aggression can never be legitimized or excused simply because the perpetrator is wearing a government costume. It's time to fulfill our destiny as unconditional sovereigns over our own lives and property. It's time to eradicate government from the faith of the earth.