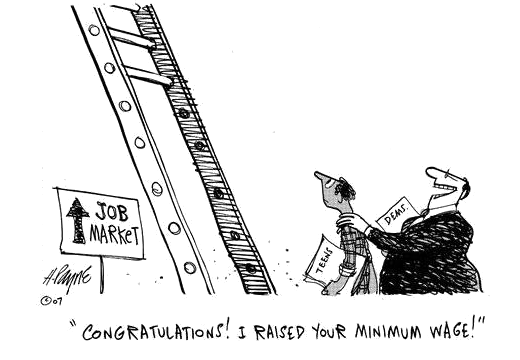 Economics is not everyone's forte and that's OK. The problem comes when those who are wholly ignorant of the subject attempt to impose their ignorance upon the rest of us via well-meaning but dangerously illogical campaigns to ignore economic realities and radically hikes the minimum wage.

Let's start with the basics. Supply and demand are the two primary economic factors which determine price. The appropriate price is found at the equilibrium point between these two factors. If I have widgets to sell, and no one will buy them, there's a very good chance the reason is that I am asking too high a price. If I sell out almost immediately, my price was in all likelihood too low.

Selling one's labor is really no different than selling widgets. If no one will hire you, the price you are asking for your labor is probably too high. If multiple people are competing to hire you, you could probably ask for more. Obviously, all labor is not equivalent even as all widgets are not the same, but the principle of supply and demand applies across things which are the same and things which can serve as acceptable substitutes. A doctor and a waiter are not competing for employment in the way a busser and a dishwasher might.

When supply exceeds demand, the resulting scenario is called a surplus. When the supply of labor exceeds the demand for it, the resulting surplus is called unemployment. The most straightforward way to reduce a surplus is to lower the price. When my widget store has merchandise that no one will buy, I either have to put it on sale temporarily or on clearance to get rid of it. In this way, demand can be increased by lowering the price. Likewise, if no one will hire you, the best way to increase demand would be to lower the asking price for your labor.

Obviously, the minimum wage is not helping the unemployed, but what about those who are employed? Won't they at least benefit from higher wages? Let's go back to our widget store. If I am selling widgets for a price which is just above the price floor, and then the price floor is raised, should I expect that my customers will be understanding and continue to buy widgets at the same rate despite the price increase? Of course not. The economic realities of supply and demand dictate that if the price is increased above the equilibrium point, a surplus will result.

What does that mean for employees? As an employee, you are actually the seller because you are selling your labor, and your employer is your customer. Just as my widget customers had to cut back when I was forced to raise prices, so your customer (your employer) will have to cut back on his labor purchases once the price goes up. In most cases, these cuts will mean either reduced hours or job loss.

Increasing the minimum wage does not magically produce more money for employers to allocate to their labor purchases. Instead, some businesses will close, others will shorten their hours, and some will look to automate or outsource. The market will survive the shift, but many businesses and employees will not.

Perhaps the most poignant factor in this debate is who will be harmed the most. It's not the CEOs or shareholders, it's not even the managers—it's those who are less skilled or otherwise less desirable as employees. The young person looking for their first job, the recently incarcerated man trying to abide by the terms of his parole, the single mother who needs very specific hours for her second job—these are the people whose labor will become part of the unpurchased surplus which makes up this nation's unemployed. The folks who need the raises the most won't get them; instead, they'll get pink slips.

I'm not insensitive to the needs of those struggling to get by on a miserly paycheck. I've been there and it's rough. I am glad, though, that I was able to get a job at all. It was the experience that I gained in my low-paying jobs that allowed me to get better ones and eventually to earn more money. Raising the price floor on how much an individual can sell their labor for is not the solution to people earning too little money. Ignoring economics is not the path to prosperity.