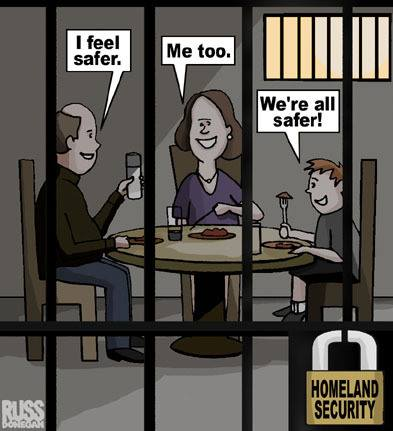 Thanks to Reason, I am now aware that Marco Rubio (a person I generally endeavor to ignore) is engaging in a level of fear-mongering which would be laughable if he weren't actually a serious contender to be the GOP Presidential nominee. His website boasts—in both text and a graphic—that "Nothing Matters If We Aren't Safe." The word "safe" is literally the biggest thing on his website, even larger than his all-lowercase, one-word, dotted-with-a-map-of-the-US name which sits at the top of his site.

I won't try to restate all the excellent points that Robby Soave has already made, but I will use this opportunity to reiterate an idea I have been focusing on lately—freedom is the opposite of fear. Marco Rubio may be just another politician in the long line of neocons advocating murder and genocide under the guise of "safety," but to overtly claim that "nothing" else matters is a new low.If we're going to be hyperbolic about things, I would say that contrary to Rubio's contention (and to the alarmist bullshit spouted by neocons in general) the truth is that "Nothing Matters If We Aren't Free." Rubio's mindset leads to a life of isolation and fear in which our neighbors must be eyed with suspicion and a cloud of mistrust hangs over humanity. Yes, there our dangerous people in positions of power in various governments throughout the world—none of which possess or have exercised a greater ability to harm people over the last two decades than the US government—but that doesn't mean that our lives should be ruled by fear.

One more point, the exclusive focus on "safety" pushed by Rubio and others has actually made us far less safe by encouraging increased government spending and spying. Government—and the power it affords to those within it—is a far greater threat than all the "lone wolf" psychopaths in history. The truth is that Marco Rubio is trying to manipulate you. He wants you to be afraid because fearful people are easier to control. He wants you cowering under the bed, looking for someone to save you, and he wants to be the guy your fear impels you to support.

Don't let him win! I'm not even talking about the Presidency here (although I don't want him to win that either); I'm talking about the battle between freedom and fear. Don't let fear drive you to make tragic mistakes like hating people based on their birthplace, endorsing government violations of freedom, or voting for fear-mongers like Marco Rubio. Those who hate freedom rely on using the politics of fear to control how you view the world. Simply not falling for their tricks is the first step toward re-establishing the freedom they want so desperately to tear down.