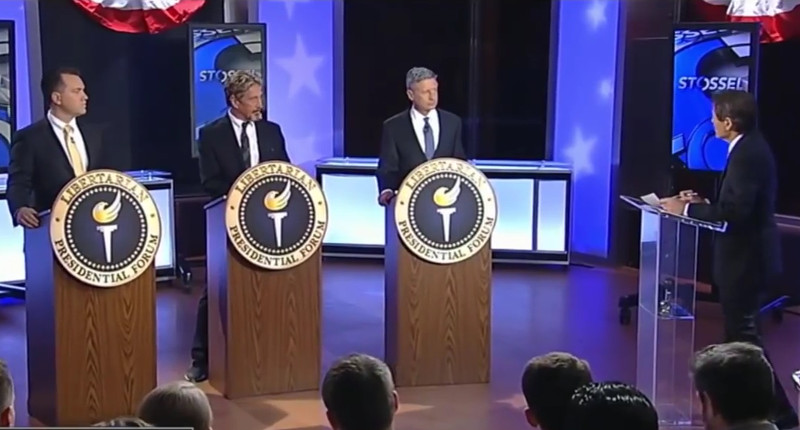 Having watched part 1 of the John Stossel hosted Libertarian debate, I am disappointed but not at all surprised. As I said last week prior to having seen it, "Most of the ex-Republicans who make up the bulk of the Libertarian party are not actually philosophical libertarians, and they neither accept nor understand the foundational principles of the philosophy they claim to support."

There are many specific comments made by the candidates with which I could take issue, from Gary Johnson's reference to possible discrimination by public utilities as a justification for supporting the use of state force to prevent religious discrimination by a baker to Austin Petersen's repeated referencing of the constitution as if it is the font of both wisdom and morality, but there is a far more basic issue that concerns me.

None of the three candidates in the debate appear to appreciate or even truly understand the philosophical underpinnings of libertarianism. Where was the discussion of the non-aggression principle, the inalienability of the will, natural rights, or self-ownership?

The protracted discussions of 'should the government do A or B?' ignores the fact that any action taken by a state is an act of violence and coercion. A consistent libertarian President (which is really an oxymoron, but let's assume it happened) would do whatever he could to grind government to a halt. Fire as many government employees as possible, abolish as many departments and agencies as possible, spend as little stolen money as possible, pull the military out of everywhere possible, etc.

In short, anything that a libertarian president could do to make the state smaller or weaker he should do because the state fundamentally cannot act in a way which is moral or consistent with natural rights and the non-aggression principle. The candidates' answers regarding the welfare state revealed their underlying confusion on this issue.

No matter how much statists may protest the fact, a state—even a minimal state—cannot do 'good' things because even actions which would be laudable when done by individuals become immoral aggression when they are carried out by a state funded and maintained through coercive expropriation.

The fundamental problem is not that Gary Johnson, John McAfee, and Austin Petersen aren't pure enough in their libertarianism, it is that libertarianism is not actually a political philosophy. Politics is the category of activities associated with governance by a state, and libertarianism is not about governance or the state, it is an explanation of how individuals can and should coexist peacefully. Step one in that process is to abolish the state—the most violent institution imaginable—so that peaceful coexistence is at least possible.

The Libertarian Party (LP) could serve as a valuable vehicle to explain why politics (i.e. governance by a state) can never serve to bring about individual liberty. It could provide a platform from which to reveal the alternative to the violence, corruption, and coercion which have characterized every state throughout human history. It could acknowledge that the constitution has either authorized such a government as we have had, or has been powerless to prevent it.

Instead the LP has largely become a venue where prospective slave masters debate why beating slaves less often is superior to more frequent whippings. They may well be correct in their views on the optimum frequency of assault and battery, but the solution to the intolerable abomination of slavery was not kinder masters and less physical punishment, it was abolition.

'Pragmatists' will argue that the abolition of the state is an impossible goal, interesting as an academic discussion, but entirely unachievable in the 'real world.' They once said the same thing about abolishing slavery. "Men have always owned other men, that's how things work in the real world," the pragmatists chastised the 'utopians' who called for an end to the barbaric practice. The pointed to biblical references as a defense for owning another human being even as statists frequently do in defense of institutionalized coercion in the present day.

Few today would defend slavery and virtually no one would attempt to argue that it was a 'necessary evil' that could never be eradicated; such a claim would be at odds with reality. Likewise, one day mankind will look back on the days of statism with the same mixture of confusion and horror with which we now regard chattel slavery. Those 'utopian' abolitionists were absolutely right—it seems obvious today—and they will be right once again, but this time, the slavery that is abolished will be far more comprehensive.

The Libertarian debate was disappointing because the philosophy of libertarianism is not about governance, it's about liberty. Until the Libertarian Party figures that out, it will remain a paradoxical oddity relegated to the impossible task of convincing statists to support less statism and anarchists to support more. Good luck with that.