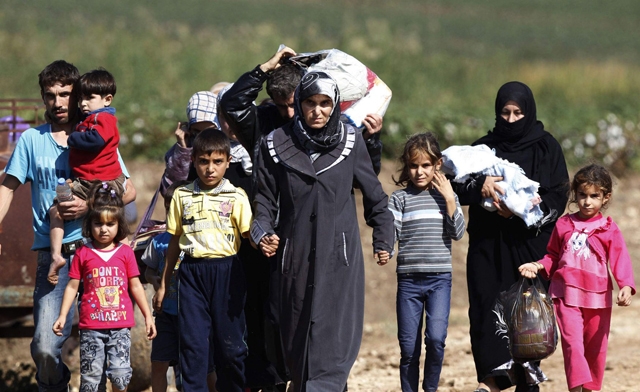 The subject of refugee resettlement has been a major point of contention lately, but the arguments offered by libertarians are particularly interesting in that they manage to arrive at entirely opposite conclusions despite ostensibly starting from the same fundamental principles. The basis of libertarianism is the non-aggression principle (or NAP.) This principle states that it is never morally acceptable to initiate force against another person.

The arguments against refugee resettlement typically take two forms: the first argues that refugee resettlement constitutes a security risk and the second asserts that government spending money to resettle refugees constitutes a violation of the NAP because all government resources are ultimately stolen. The argument regarding the claimed security risk is not particularly popular among libertarians, but some (such as Lew Rockwell) have suggested that open borders and free movement are not necessarily the only positions compatible with the NAP. Many others disagree.

The libertarian arguments for refugee resettlement are based largely on the fact that the state should never restrict the free movement of individuals, especially when private individuals or entities—landlords, employers, businesses, churches, etc.—wish to engage in commerce with them or provide them with aid or assistance. Where libertarians are most divided seems to be on the issue of the state spending money to resettle or provide other assistance to refugees. Some argue that advocating a preference on state spending is a de facto endorsement of government spending, while others hold that pushing for the state to spend money reducing (or at least not causing additional) harm is better than allowing the state to use the resources it has stolen in extremely harmful ways—such as on war.

Now for what I believe.

There are two components to my argument in favor of refugee resettlement. The first deals with government expenditures and the second deals with relocation more broadly. My logic is as follows:

Victims of violence deserve restitution from the individual or entity which initiated the violence. As the Syrian refugees were displaced due to US military action and US munitions supplied to "rebels" by the US government, they are owed restitution from the offending entity, i.e. the US government. While I fully acknowledge that the US government has access only to stolen goods and money, I still hold that—so long as the US government continues to operate and expend resources—it is more just to expend those resources as restitution for harm caused (be it to refugees, victims of police brutality, etc.) than it is to expend them in any other manner (except, of course, to return the resources directly to the individuals from whom they were originally stolen, but that option is clearly not on the table right now.)

More broadly, I believe that the free movement of human beings—including across the fictional lines drawn on maps by tyrants and bureaucrats—is a critical component of human liberty. Even if we lived in a stateless society or if government were deprived of its resources (both things I advocate), I would still advocate that refugees be allowed to relocate and resettle anywhere they wished, but in such a case the funding would necessarily come from private sources.

At the foundation of my beliefs are three fundamental principles. The first is the NAP, the second is that every state is a criminal organization, and the third is that one can simultaneously (and consistently) advocate the abolition of slavery and hold that slave owners should treat those they claim as their slaves with less cruelty and more compassion. While my ultimate goal remains the total abolition of the state, my interim goal is to reduce the harm that the state does to individuals.

Murray Rothbard once said, "If you wish to know how libertarians regard the State and any of its acts, simply think of the State as a criminal band, and all of the libertarian attitudes will logically fall into place." This is how I regard the state, and is ultimately why I support refugee resettlement. If a criminal cartel blew up an apartment building, I would support forcing the cartel to expend its resources to make restitution to the victims of its crime. Likewise, I support forcing the state to do the same for the refugees that its wars and proxy wars have created.

One final point on this subject. It seems to me that even among libertarians, the opposition to Syrian refugees is far more pronounced than is opposition to other government programs or even to refugees from other regions. What this reveals is that in addition to any principled arguments which may exist against refugee resettlement, there is also an underlying (and undeniable) component of bigotry which uniquely opposes assistance to individuals who practice the religion of Islam. Now, prejudice may not be an explicit violation of the NAP, but it is still an attribute which I find highly undesirable in others and which causes me to choose to disassociate with them. If your views of individuals are colored by the location or religion into which they were born, you are abandoning the principle of individualism and engaging in a particularly egregious form of collective thinking.

If you really want to quantify the theoretical security "risk" of bringing Syrian refugees to the US, Alex Nowrasteh has done the math and proves conclusively that the risk is essentially zero.