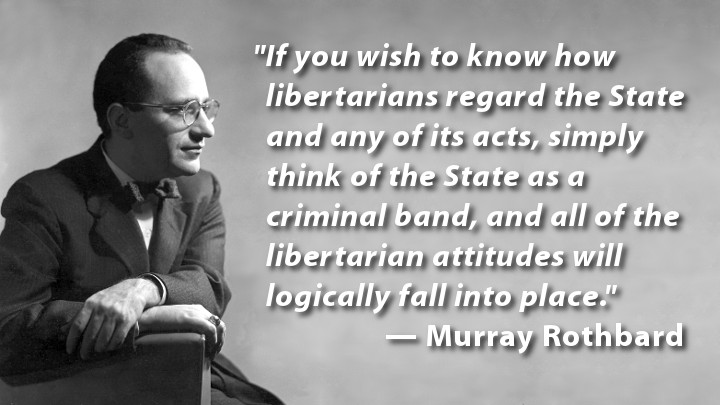 I wasn't always this way. Like so many in the libertarian tradition, I was brought up as a conservative christian and taught that the USA, the military, and the police were the "good guys" who I should thank for my freedom. I was brought up to pledge allegiance to the flag and to see the constitution as the foundation of human freedom. Republicans were the good guys and Democrats were the bad guys. Ronald Reagan had been our savior and Bill Clinton our destroyer.

At the time, it was a comfortable reality. Rush Limbaugh was my daily dose of us-versus-them propaganda. Fox News made sure I knew how dangerous the world was without 'Murica to protect me. It took many years for me to extricate myself from the cult of statism and to accept reality and reason in place of fear-mongering and indoctrination.

It was 2007 when I first saw Ron Paul in person. He gave a lecture in a small auditorium in what was then called the Albertson College of Idaho (now The College of Idaho.) At the time I wasn't too impressed. His domestic policy seemed fairly sound (I've always had some libertarian leanings) but his foreign policy seemed crazy. "Maybe isolationism made sense in the pre-nuclear era," I thought, "but without 'mutually assured destruction' of the Cold War, we'd all be dead!" It took me many more years of study before I fully realized the fallacies I was embracing with that rationalization of genocide.

Along the way, I came to read the works of (and meet, in many cases) many astute scholars of liberty. Men like Ron Paul, Thomas Woods, Walter Block, David Friedman, Lew Rockwell, Lysander Spooner, and my personal favorite, Murray Rothbard. There were others who I discovered later—Robert Higgs, Sheldon Richman, Jacob Hornberger, Larken Rose, and many more—who helped (and still help) to broaden my understanding of human liberty and natural rights.

It has always been Rothbard, though, whose words resonated most deeply with me. He could be infinitely pragmatic when necessary—he helped found both the Libertarian Party and the Cato Institute—but there was always an underlying theme in all that he did of hating the state. He saw what it took me many years to realize: the state is fundamentally evil. The state did not merely become evil over time or have evil tendencies to be exploited, the state was and is evil incarnate. Whether or not mankind is inherently evil is a debate perhaps best left to the religious philosophers, but on the subject of the state there can be no equivocation; it is inherently and irredeemably evil.

Once I understood both the necessary history and philosophy to see the true nature of the state, it was as if a veil of ignorance had fallen away. No more could I embrace the notion that I as an individual was any part of a collective state. "We" weren't at war with "them"; states were at war with states, and innocent individuals on both sides were caught in the crossfire. I didn't owe anything—taxes, loyalty, respect, or allegiance—to a state or its symbols. (I might indeed opt to pay my taxes even as a store owner might pay protection money to the mob, but this is a tactical decision, not a moral one.)

One of my favorite quotes from Rothbard (which remains my email signature to this day) sums up libertarianism as I see it. "If you wish to know how libertarians regard the State and any of its acts, simply think of the State as a criminal band, and all of the libertarian attitudes will logically fall into place." It's really that simple. The state is not a legitimate entity enforcing the terms of some mystical "social contract" that binds individuals to a collective, it is rather a criminal band or a "gang of thieves writ large" as Rothbard referred to it.

For some people, libertarianism seems to be a burden. They know the truth, but wish it could be as they once believed. For me, it's exactly the opposite. It is statism that was the burden. In libertarianism, I find the freedom to be an individual unbridled by obligations to a collective of which I want no part. I don't have to pledge allegiance to a flag; I don't have to play the political game and pretend that voting somehow legitimizes theft, kidnapping, and murder. The non-aggression principle turns morality into a simple science rather than a mystical series of undefined and ever-changing responsibilities and rules. My life as a libertarian is fulfilling because my obligations—I owe you only non-aggression—are as clearly defined as is my enemy—the state.

I am an abolitionist. I am "a 'button pusher' who would blister his thumb pushing a button that would abolish the State immediately, if such a button existed." I used to apologize for expressing opinions which offended the statists in my life. I used to offer up my critiques of the state merely as philosophical musings rather than incontrovertible facts. I'm done with that. I'm done trying to couch my abolitionist views in the tired idioms of "conservatism." I'm not a conservative. There is not some greatness of the past to be recovered or conserved. History is but the recordings of madness on repeat, the undying superstition that the state was necessary, legitimate, or both.

Rothbard explains it thusly, "The libertarian is also eminently realistic because he alone understands fully the nature of the State and its thrust for power. In contrast, it is the seemingly far more realistic conservative believer in "limited government" who is the truly impractical utopian. ... The idea of a strictly limited constitutional State was a noble experiment that failed, even under the most favorable and propitious circumstances." I used to be that impractical utopian. Now I know better. Thanks to Murray Rothbard and the many others who have helped me to understand the truth, I am free of the superstitious belief in the authority and the tyranny of positive obligation. There truly is nothing better than that.