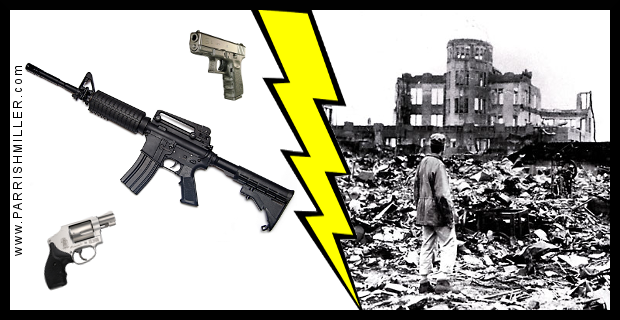 The gun is an excellent defensive weapon because it is designed to kill individuals one at a time. As the lethality of a weapon increases (particularly as to how many individuals it is designed to kill at once) it becomes less suited to justifiable defensive use and more suited to the unjustifiable slaughter of innocents. By the time we reach the end of the spectrum containing weapons of mass destruction (nuclear, chemical, and biological) it becomes almost impossible to conceive of a use which does not necessarily involve killing innocents.

Even non-nuclear bombs are hard to use in a justifiable manner because it is difficult to target only guilty individuals and to ensure that no innocents will be incidentally harmed or killed. If a defensive strategy calls for the extensive use of high explosives, it is probably more accurately described as an offensive strategy, and as such will unavoidably entail violations of the non-aggression principle.

Ultimately, only individuals (not broad and involuntary collectives such as countries) are capable of action and thus of aggression, so only individuals may be justifiably targeted with the use of defensive force. Bringing unapologetic criminals and murderers such as Adolf Hitler or Saddam Hussein to justice would certainly be acceptable, but carpet bombing Dresden or invading and occupying Iraqi homes and cities would not.

It is never justifiable to use force against innocents merely because of their proximity to the guilty.