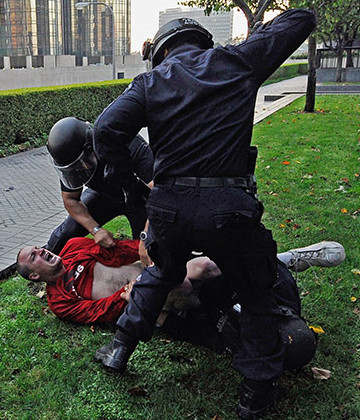 Wearing a government-issued costume can never make initiating force moral or justified, yet we see such aggression occurring every single day, and many people excuse or even applaud this violence.

Cops regularly assault, rob, kidnap, and even kill individuals in response to their engaging in some victimless action (speeding, lacking certain paperwork, possessing banned goods, etc.), yet these enforcers are almost never condemned or held accountable for their acts of violence. Soldiers invade, occupy, destroy, and kill as a matter of course; yet only a tiny fraction of their victims are actually guilty of harming others. The rest are dismissed as "sympathizers" or "collateral damage" while the soldiers are called "heroes."

Let me be perfectly clear: If a cop or soldier (or any other government agent) detains or otherwise coercively interacts with an individual for any reason whatsoever that does not involve that individual actually causing articulable harm to another person, that costumed thug is guilty of kidnapping and the aggrieved individual is morally justified in using force—up to and including lethal force—to terminate the aggression. Please understand, however, that such defensive action will almost certainly result in death or imprisonment by the gang of malevolent sociopaths who call themselves the government.

Wearing a government costume doesn't make one a hero or entitle one to respect. Engaging in robbery, battery, kidnapping, murder, or other acts of aggression under color of law (government approval) doesn't make such actions any less criminal or unjustified than if they were committed in any other manner. Nothing a government says or does can make an immoral act moral. Period. No exceptions. The initiation of force—by anyone, against anyone—is always wrong, is always unjustified, and is always justification for the use of defensive force to resist the aggressor.