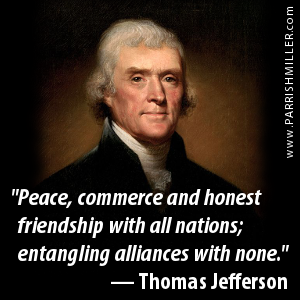 Despite the ever-prevalent 'us-versus-them' rhetoric that abounds in most discussions of foreign policy, in reality, there is no 'us' and there is no 'them.' All individuals have natural rights and those rights cannot be created or destroyed—though they can certainly be violated—by anyone or anything. These rights are every individual's birthright—be that individual American or Mexican, Christian or Muslim, straight or gay, young or old. When certain people (especially political leaders) attempt to portray an entire race, religion, or the inhabitants of a country as being either good or bad, friend or foe, you can know the person speaking is engaging in the fallacy of collectivist thinking.

Nevertheless, if we indulge this collectivist mindset momentarily, let us ask ourselves what threat actually exists to 'Idahoans' from 'them'? Assuming 'them' represents 'terrorists'—America's current favorite catch-all colloquialism for bad guys—we must consider whom the 'terrorists' target and why they target them. Contrary to the fear mongering of Benjamin Netanyahu and other hawks around the globe, most so-called 'terrorist attacks' in recent years have not targeted primarily civilians, but have targeted the militaries and governments of countries that have inserted themselves into the internal politics of other nations.

Remember when 'terrorists' bombed the USS Cole in 2000? This was an attack on a US naval vessel which was in a Yemeni port at the time. Even the 'Fort Hood shooting' perpetrated by Maj. Nidal Malik Hasan in 2009 was ultimately an attack on the military (and not the people) of the US. Obviously, 9/11 stands out as the most blatant terrorist attack on civilians, but there was a reason for that.

The attacks of 9/11 were not the acts of fanatics who 'hate us for our freedom,' nor were they an attempt to establish a 'global caliphate.' The attacks of 9/11 were retaliatory strikes for the ongoing meddling of the US and Israeli governments in the internal affairs of other countries. This is not to say that attacking civilian targets was justified. It was wrong when the US targeted civilian population centers in Japan during World War II, and it was wrong when the perpetrators of  the 9/11 attacks targeted the World Trade Center in New York City. To claim, though, that the US was targeted for its predominant religion or for its supposed "freedom" is to ignore reality and to ignore the clear and concise explanations given by those responsible.

Osama bin Laden, the 'mastermind' behind the attacks, was not shy about explaining the reason why the 9/11 attacks were perpetrated.

It had never occurred to us to strike the towers. But after it became unbearable and we witnessed the oppression and tyranny of the American/Israeli coalition against our people in Palestine and Lebanon, it came to my mind. The events that affected my soul in a direct way started in 1982 when America permitted the Israelis to invade Lebanon and the American Sixth Fleet helped them in that. This bombardment began and many were killed and injured and others were terrorized and displaced. I couldn't forget those moving scenes, blood and severed limbs, women and children sprawled everywhere. Houses destroyed along with their occupants and high rises demolished over their residents, rockets raining down on our home without mercy. The situation was like a crocodile meeting a helpless child, powerless except for his screams. Does the crocodile understand a conversation that doesn't include a weapon? And the whole world saw and heard but it didn't respond. In those difficult moments many hard-to-describe ideas bubbled in my soul, but in the end they produced an intense feeling of rejection of tyranny, and gave birth to a strong resolve to punish the oppressors. And as I looked at those demolished towers in Lebanon, it entered my mind that we should punish the oppressor in kind and that we should destroy towers in America in order that they taste some of what we tasted and so that they be deterred from killing our women and children.1

Did the acts of the US and Israeli governments in the Middle East justify attacking civilians in the US? Certainly not—two wrongs don't make a right—but this explanation does help to clarify why the attacks happened. They had nothing whatsoever to do with 'hating us for our freedom' and bin Laden acknowledged as much.

I say to you that security is an indispensable pillar of human life and that free men do not forfeit their security, contrary to Bush's claim that we hate freedom. If so, then let him explain to us why we don't strike for example - Sweden?

Why indeed? There are numerous countries, in fact, which have not suffered any terror attacks in recent decades. Almost all of the countries which have experienced attacks have been guilty of foreign interventionism. I believe it is fair to say that Idaho would not face any substantive danger from 'terrorists' if it were not for the actions of the US government.

But what of Iran and Israel? My answer will no doubt cause some to take offense, but that situation does not merit intervention by the US government. Iran may indeed seek to procure a nuclear weapon, but its reason for doing so would not be to launch itself into a suicidal war with the west or even with Israel. Iran wants the kind of détente which today exists between the US and Russia—and such a scenario is only possible when Israel is not the only nuclear power in the region.

Iran does not want to attack or occupy Idaho. Neither does al-Qaeda or ISIS for that matter. While there may be some individuals who would like to carry out acts of terror just to obtain notoriety, this is not substantively different than disaffected teenagers who shoot up a school or aggrieved employees engaging in workplace violence. Yes, there are criminals in the world, and yes there will occasionally be senseless acts of violence perpetrated against innocents, but large-scale Islamic resistance to western interventionism is something else entirely.

Thomas Jefferson said it best, "Peace, commerce and honest friendship with all nations; entangling alliances with none."2 He didn't equivocate. He said "all" and "none." The US government needs to terminate its "entangling alliances" and work to cultivate "peace, commerce and honest friendship" with the rest of the world. If Idahoans want to be as safe as possible from terrorism, that's the best and most logical policy.